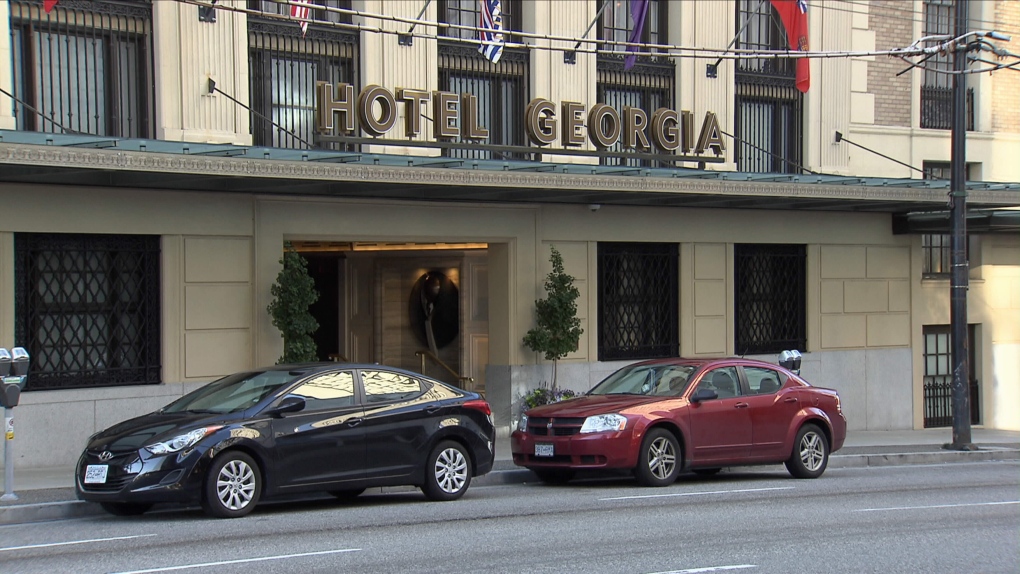 The Rosewood Hotel Georgia is seen in this undated file photo. (CTV)

The union representing hundreds of hospitality workers at five downtown Vancouver hotels has released data from a survey that it says shows an "alarmingly high" number of incidents between female workers and guests.

The survey was open to any of the roughly 1,500 hospitality employees the union represents across the five hotels, meaning some 13 per cent of workers responded. Nearly all of the respondents were women.

Nearly three-quarters (73 per cent) of surveyed workers at Hotel Georgia said "yes" when asked if a guest had ever done something that made them feel uncomfortable. More than half of respondents at the Westin (55 per cent) and Hyatt (52 per cent) also answered "yes" to this question.

More specifically, two-thirds (67 per cent) of surveyed workers at Hotel Georgia reported that a guest had made an unwelcome sexual joke, comment or question, and 56 per cent said a guest at the hotel had touched them -- or attempted touch them -- in an unwelcome way.

Workers who took the survey at the other four hotels were less likely to report having had such experiences on the job.

Most of the workers surveyed said they had never received any training on how to deal with these behaviours, and 37 per cent said they never reported the unwelcome guest behaviour to management.

These recommendations mirror some of the changes Hotel Georgia workers said they hoped to see when they filed a complaint with B.C.'s Human Rights Tribunal last month. On Saturday, the union said the other four hotels -- excluding Hotel Georgia -- had agreed to implement these changes.

A total of 45 Hotel Georgia employees responded to the survey. The rest of the completed surveys came from the Westin Bayshore (51), the Hyatt (48), the Pinnacle (34) and the Four Seasons (13).

Despite these small sample sizes, Unite Here spokesperson Sharan Pawa told CTV News Vancouver the union believes the responses from each hotel are representative of that hotel's entire workforce.

In other words, the union believes that not only do 73 per cent of the 45 Hotel Georgia workers surveyed say a guest has made them uncomfortable on the job, but the same percentage of all female workers at the hotel would say the same, if asked.

"Many of our members are still afraid to disclose the sexual harassment issues they have experienced," Pawa said. "We feel the survey results are emblematic of the industry as a whole, and show a pattern of issues faced by staff at their hotels which need to be addressed urgently."

The union worked with Simon Fraser University's Morgan Centre for Labour Research to analyze the survey data. The survey was conducted online and in person during the month of July.