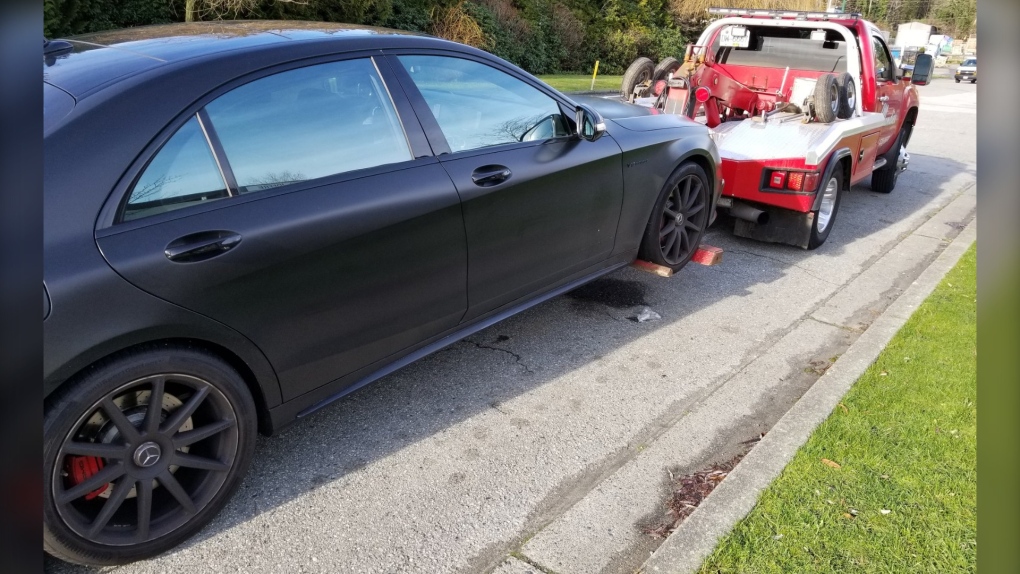 The detachment posted photos of three vehicles being towed in the area Saturday morning, after officers stopped them for excessive speed. (Burnaby RCMP)

VANCOUVER -- Mounties in Burnaby say they stopped three vehicles travelling at speeds more than double the limit in the same area Saturday morning.

Marine Way near Boundary Road may have a concrete median, but that doesn't mean drivers should treat it like the Trans Canada Highway, Burnaby RCMP said in a tweet.

The detachment posted photos of three vehicles being towed in the area, after officers stopped them for excessive speed. The speed limit in the area - and in all municipalities in British Columbia unless otherwise posted - is 50 km/h.

All three vehicles stopped Saturday morning were travelling at more than 100 km/h, according to police. The last driver was also distracted, RCMP said.

The area of Marine Way/Boundary Rd continues to be treated as if it were the Trans Canada Hwy, one of our traffic enforcement officers today stopped 3 vehicles in a row on @CityofBurnaby streets doing over 100 km/hr in the 50 km/hr zone with the last driver also being distracted pic.twitter.com/icBkovwv59

This is the second warning Mounties have tweeted about speeding in that area in the last two weeks. On Dec. 30, a similar situation led to tickets for three drivers who were going 98, 102, and 136 km/h in the 50 km/h zone.

Officers frequently catch speeders in the area going much faster than the speed limit, which transitions from 70 km/h to 50 km/h as drivers travel west toward Boundary Road.

New apartment buildings have recently been built in the area and the neighbourhood is becoming more residential, so increasing traffic safety is a priority, Burnaby RCMP said in December.