Vancouver's most notorious feathered felons are striking again, especially in the West End.

Residents of the area near Stanley Park have reported an increase in attacks from above. The culprits? Crows.

Reports range from simple noise complaints – "Cawing constantly all day" – to situations that seem ripped from an Alfred Hitchcock film.

"My head got pecked and was bleeding," one person wrote of an incident Friday on Barclay and Jervis streets.

Further west on Barclay, last week a crow dive bombed a pedestrian and grabbed at their hair as they walked near Lagoon Drive.

The reports were filed on CrowTrax, an interactive map set up by Langara College instructors Rick Davidson and Jim O'Leary which encourages residents of B.C.'s South Coast to report their avian altercations.

The map's creators ask victims of the winged villains to plot the attack on the map, describe their altercation and rank it on a five-point scale of aggressiveness.

The user-generated map was launched last year, and more than 1,500 reports were added to it by the end of the year. The instructors relaunched the program this year after receiving "tremendous interest" in the map and technology behind it. 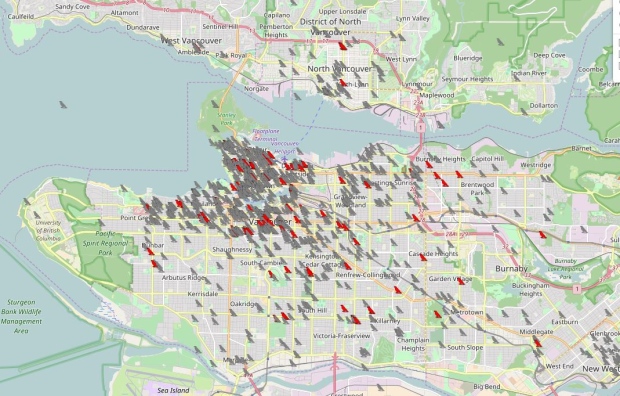 The above screen grab of the CrowTrax map shows attacks reported in 2016 (grey) and in the first few months of 2017 (red).

"Crow attacks just seem to touch a nerve. It seems like almost everybody has got a crow story… It is traumatic to be smacked in the back of the head by a crow when you're not anticipating anything."

While being attacked by a bird rarely leaves anyone with serious injuries, they are able to draw blood, he said.

Though the image of crows descending on Vancouver pedestrians, swooping with beaks and talons at the ready, seems like something out of "The Birds," the reason behind most of the attacks is simple parenting.

Crows nest in the spring, and attacks are reported each year between April and June as the birds try to protect their young, O'Leary said.

Crows are most aggressive around the time when their young are out of the nest and on the ground, but still not able to fly very well – "a couple weeks before that and a couple weeks after that too," he said.

And the season of aggressive crows is expected to last a bit later this year, thanks to a late start to warmer spring weather. In some areas it may last until July.

"Generally when you see the crows on the ground it seems to be the peak of when the mature crows are most aggressive. After that point all of the sudden they just calm down, they're just regular birds after that," O'Leary said.

O'Leary said many of Vancouver's annual dive-bomb attacks occur in the city's West End and downtown core. They're often drawn to the area for the tall, leafy trees of Stanley Park, and the easy access to food left behind in the garbage and dumpsters behind restaurants.

"If you're a crow you just need a few French fries every day and you've got yourself a meal, so this is a very good area for crows."

He said attacks may also be more common in the West End because the narrow sidewalks mean people are walking right near the trees where the birds have their nests.

"Around here you get a lot of human-crow interactions, most of which go badly for the humans."

Some of those interactions occurred in a two-week period at Pendrell and Nicola streets, where at least five people were dive-bombed.

"Bending down to pick up after my doggie. Bam! Crow dive-bombed my head. Unprovoked, not enough to draw blood but enough to be sore," read one report from earlier this week.

Another said they were hit by a crow that then "stalked" them along Nicola and swooped several more times.

Barclay and Jervis is another hot spot, with multiple reports that two crows "repeatedly" swoop at pedestrians and peck at their heads.

Other reports in the area include a stalking at West Georgia and Broughton streets, a nest outside the Gap on Robson and two attacks at Haro and Thurlow.

Several attacks were also reported in the area of West Pender and Hornby: "Flew into the back of my head with such force I thought I'd been smacked by someone," one person wrote.

Two were reported in the area of Railway Street and Dunlevy Avenue, but as one person wrote, the attacks occurred after the bird "gave me fair warning with lots of caws."

An ominous post from Burnaby in April simply read, "Stay away from Central Park." 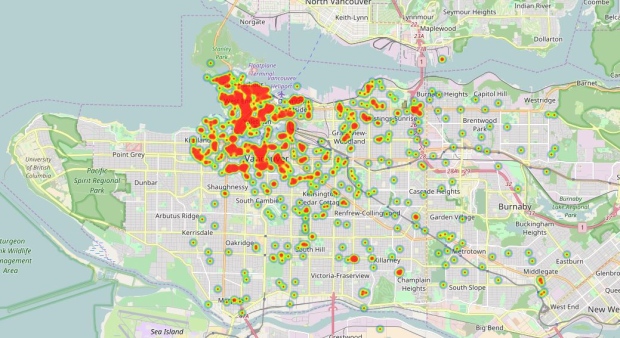 The above heat map highlights the areas where most of the reports are coming from.

HOW TO PREVENT ATTACKS

He said crows almost always attack from behind, so those who can't avoid walking by nests should turn around and face them while they walk by. A mistake people often make after being swooped at is run away, but crows may then attack the back of their heads.

"Turn around and face the crow, but also keep your eyes and ears open at this time of year," he said.

"You can't get away from crows. Crows are everywhere."

He also suggested getting a small umbrella or wearing a hat, so they won't hit be able to injure the back of the head.

Last year, a zoology expert told CTV News that crows also attack when they're defending their space and food sources.

Wayne Goodey, a lecturer at the University of British Columbia, said crows sometimes attack people with long hair in a ponytail, possibly thinking the hair is a squirrel or the tail of another animal.

He said crows can remember faces, and possibly target people who frequent their territory, but that it's difficult to prove whether an individual has been "marked" without sending in someone who looks similar.

Goodey said the best thing to do is keep moving, or stop and stare at them in the eyes.