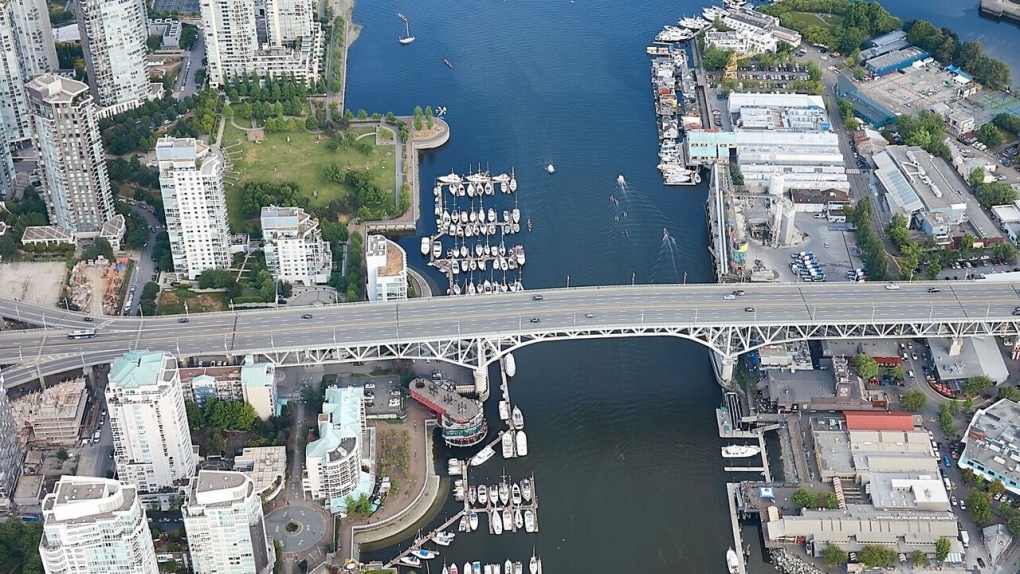 The Granville Street Bridge as seen from CTV's Chopper 9. (CTV)

The City of Vancouver wants you to have your say on the future of the Granville Street Bridge.

To do so, they're hosting open houses Friday, Saturday, and Tuesday, April 16, and inviting the public to speak their minds about the planned renewal project.

The city says the planned improvements would make walking, rolling and cycling safer and more easily accessible for people of all ages and abilities, while still accommodating drivers, transit and emergency vehicles.

According to the project's website, the eight-lane Granville Bridge was originally intended as a high-speed, freeway-style connector. Granville Street is the main thoroughfare from the Arthur Laing Bridge in Richmond; the closest bridge to the Vancouver International Airport and a major connector from the airport to the city's core.

In an information sheet, the city says the bridge has "extra capacity" and could reallocate up to four car lanes for a pathway.

The same info pack says on a typical weekday, the bridge can see as many as 65,000 motor vehicles daily, plus 25,000 transit trips.

Currently the bridge does not feature any bike lanes or signaled crosswalks. The sidewalks are narrow and elevated, which the city says makes it inaccessible for pedestrians with mobility aids like wheelchairs or scooters.

Apart from safety and accessibility, the city says they are open to "big ideas" for the public space around the bridge, including art, seating and lookout stations.

The open houses are being held at CityLab at 511 West Broadway on the following days:

An online survey is open until May 10 for anyone that can't attend the live consultations, and four workshops are planned for April 27 and April 30.