RICHMOND, B.C. -- One in four births taking place at Richmond Hospital involve an international mother, according to new statistics.

So-called “birth tourism” is a controversial phenomenon in which expectant mothers from other countries come to Canada for the purpose of accessing a Canadian passport for their newborn babies and skipping the standard immigration processes.

“It's perceived as an abuse of birthright citizenship,” said Andrew Griffith, a former director of Immigration Refugees and Citizenship Canada who is currently a fellow at the Environics Institute.

“Birthright citizenship was really designed for people who moved to Canada, who immigrated to Canada, gave birth to their children, so their children would automatically have Canadian citizenship,” Griffith said. “It was never designed for a world where you could stay in a birth hotel or a hostel, give birth and fly back to your country of origin.”

Over the last couple of years, Griffith has been collecting numbers from the Canadian Institute for Health Information, which compiles data from hospitals across the country, excluding Quebec. 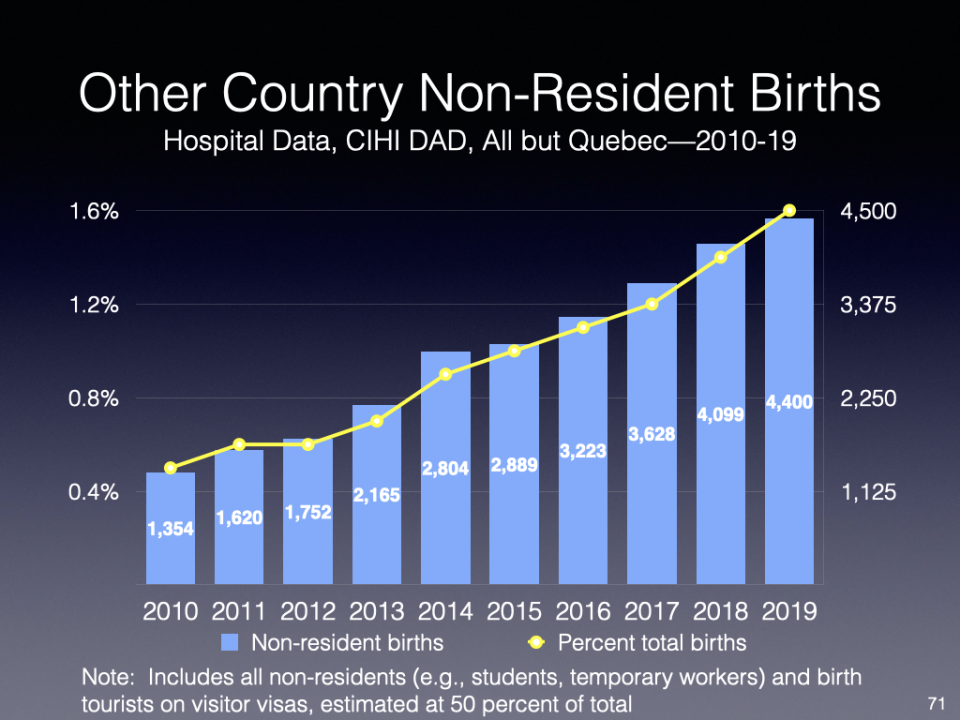 A chart Griffith created shows a 10-year trend of births by non-residents and reveals an upward curve of the practice.

Griffith notes that the term “non-resident,” in this data can also refer to international students and foreign workers. He estimates birth tourists account for roughly half of the non-resident births.

The new numbers show the 2019-2020 fiscal year and don’t include the majority of the months during the COVID-19 pandemic.

They reveal that births by non-residents made up 24 per cent of the deliveries at Richmond Hospital, a slight uptick from the year before.

The numbers jumped by more than a third for St. Paul’s and and Mount Saint Joseph hospitals in Vancouver, where non-residents made up 14 per cent of the total births. 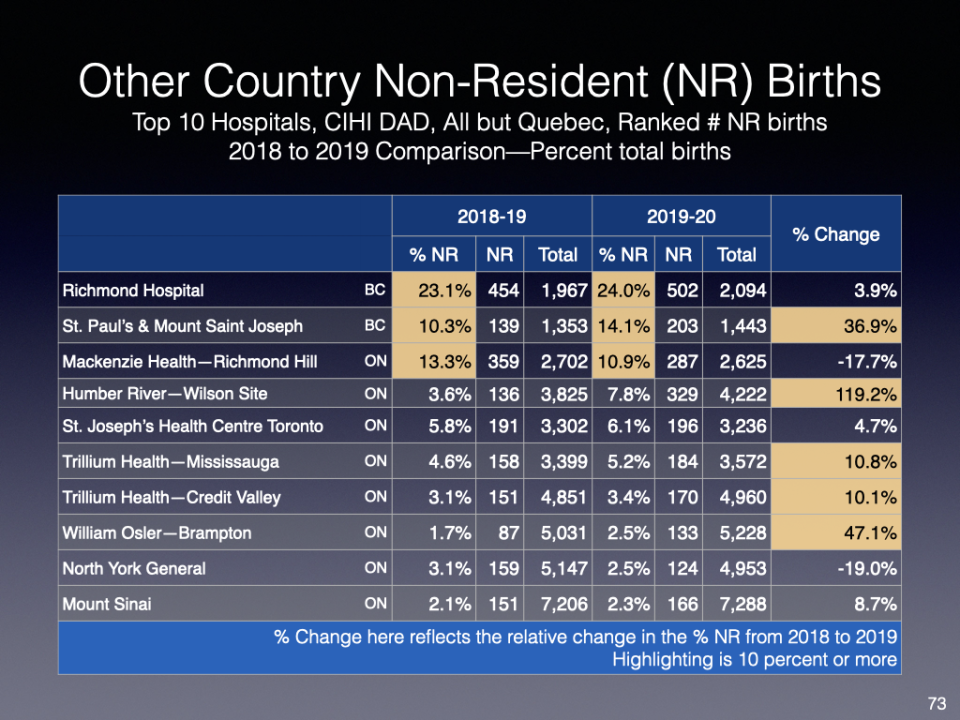 “What I find interesting is that I haven't seen really any similar outcry in any other community – even in those centres where there seems to be fairly high numbers of non-resident births – and I’m just not quite sure why that is, because it seems like the focus always is on Richmond,” he said.

Politicians from all three levels of government in Richmond have been pushing Ottawa to do more to stop the practice.

“We just feel that that is not fair, it really degrades the citizenship that we all enjoy,” said Richmond Mayor Malcolm Brodie.

He said the municipal government has been advocating that birth tourism be addressed, but those requests seem to have fallen on deaf ears.

“We can insist that those practices that are operating a business to house the birth tourists have a business licence. There's not all that much more that we can do, other than keep highlighting the problem,” Brodie said.

Jas Johal, the BC Liberal MLA for Richmond-Queensborough, said the province can step in by increasing fees for international mothers to discourage the practice, but the responsibility lies with the federal government.

“One out of four children born at our hospital are foreign nationals – that's not a hospital anymore, it's a passport mill,” he said. “If you're coming here to have a child on a tourist visa, well, guess what? That application for citizenship is null and void. A simple change like that would probably reduce, and probably eliminate, birth tourism in Canada.”

The two Conservative members of parliament for the area, Kenny Chiu and Alice Wong, have also voiced their objection to the practice.

Chiu’s office has been encouraging people to write letters to the immigration minister and offering to help deliver them.

A recent survey also found a majority of people would like the federal government set up a committee to address birth tourism.

CTV News Vancouver reached out to Immigration Refugees and Citizenship Canada regarding birth tourism, but did not receive a response before deadline. This story will be updated if a response is received.