Remembering my own uplifting experience with the Snowbirds 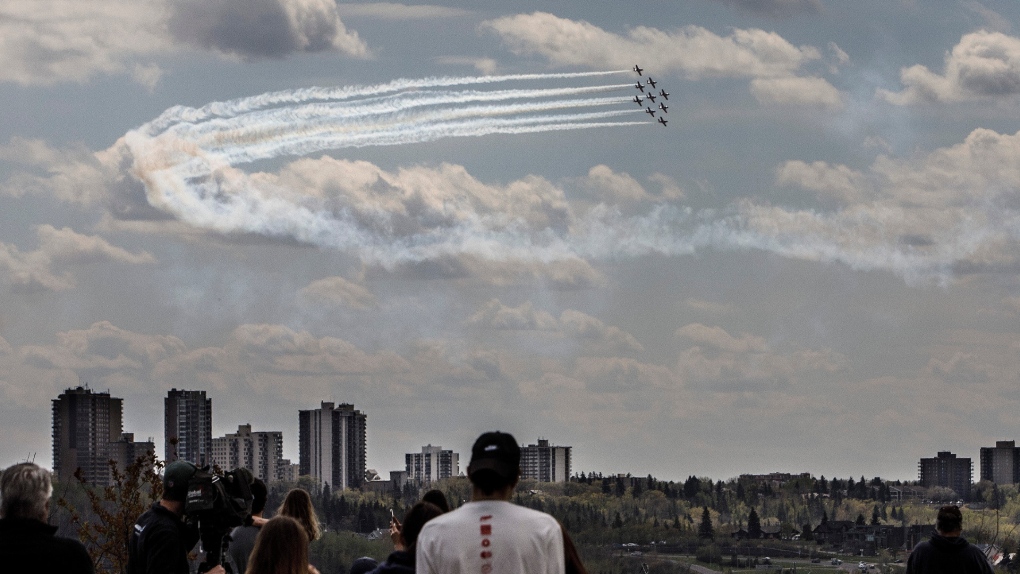 The snowbirds fly over Edmonton as part of Operation Inspiration, their cross-country salute to Canadians helping fight the spread of COVID-19 on Friday, May 15, 2020. THE CANADIAN PRESS/Jason Franson

VANCOUVER -- When I heard a flyover was happening over Metro Vancouver to honour the Snowbirds, my youngest daughter and I headed to an open clearing near where we live in hopes of catching a glimpse. It would be a sombre procession, I told her, in honour of the devastating loss of one of the Snowbirds team members. I wanted to take a moment to whisper my condolences into the air, to the beloved aerobatic team deployed to elevate Canadians during this life-altering fork in history, now ending their tour in the face of tragedy. As we craned our necks upwards into the blue bird sky, I revealed to her, "I once flew with the Snowbirds."

I was probably about 25 years old at the time, and working in my very first reporting job in Red Deer, Alta. in the mid-'90s. I was living away from home for the first time, in a city where I knew few people. The job itself was "character-building"; I was a photojournalist, shooting and reporting my own stories with little guidance or mentorship. Between the loneliness and the steep learning curve, I was having doubts about my longevity in the news gathering business.

So the phone call from my CFRN news director in Edmonton came at pivotal time. The Red Deer Airshow was that weekend, but the senior reporter they'd planned to send to fly with the Snowbirds had to cancel unexpectedly, so rather than reporting on the spectacle from the ground, would I be interested in covering it from the air? Of course, I was thrilled with the "big break" opportunity, but little did I know that it would be one of the most exhilarating memories of my career.

The morning of my flight, I arrived at the local airport and was whisked into a conference room with about a dozen other media members from various Alberta news outlets. We were each introduced to the pilot we would be flying with, and immediately launched into an intensive three-hour safety training session. Now, I kept no notes from that day 25 years ago, nor do I have photos, or any idea where the news story is that I filed, but I have never forgotten his name: Capt. Steve Dionne.

He was on his first year of a two-year tour with the Snowbirds, and he could see I was a bundle of nerves. He took extra care to make sure I understood the safety protocol, what to do in case of a mid-flight emergency, and where to find barf bags in the cockpit. I retained two pieces of information from Capt. Dionne that day. First, the importance of turning off the intercom in the flight helmet oxygen mask if I felt like I needed to use said barf bag. In other words, the pilot doesn't want to listen to someone throwing up. Roger that. Second, flying on an empty stomach makes it worse. I didn't want to admit that I'd skipped breakfast, so excused myself to use the washroom, and nibbled at a bag of corn nuts from the vending machine. Surely nothing bad could come of that.

If you've ever seen the Snowbirds perform, I don't have to tell you how impressive they are. Tight formations, rotations, glorifications. After donning a flight suit, climbing into the Tutor jet, and taking off into the prairie sky, I had no expectations we would do anything other than 'fly around' so the media could get their photo op. I had a small handicam with me, to capture the view from the cockpit, and I recall turning the camera to look outside the window on my right - and gasping at how close we were to the jet next to us in formation.

After a while, each team veered off, so a more relaxed tutorial could take place between pilot and passenger. As we flew closer to the Rockies, Capt. Dionne let me take the controls, and fly on my own. Now keep in mind, this excursion took place less than 10 years after Top Gun broke the box-office sound barrier, so you can imagine where my mind was at. I was Maverick!

I'm not sure if the squadron intentionally waited until near the end of the hour long flight to start maneuvering loops and rolls. Perhaps it was an opportunity for them to show off, and minimize the amount of time they'd have in the cockpit with queasy journalists. Nevertheless, the dizzying stunts were a worthy grand finale. The G-force rendered my handicam-holding arm useless, so i wasn't able to capture the moment for my news report. I recall going around and around more times then i could count, too scared to want to keep going, yet too adrenalized to ask for it to stop. Thankfully, it was only during that final descent that I began to taste the corn nuts. No emergency baggie needed, but the timing of our landing was critical.

Funny how the high of an experience like that really hits you after the fact (and once the unsettled feeling of a stomach full of corn nuts subsides). We were back on solid ground, but I felt like I was still in the clouds. I thanked Capt. Dionne for the flight, for the interview, and for his service. I barely remember leaving the airport to go back to my bureau to file my story (It's somewhere in the CTV News Edmonton archives if they hold onto material that old), but looking back, that flight with the beloved Snowbirds elevated me, at a time when I needed it most.