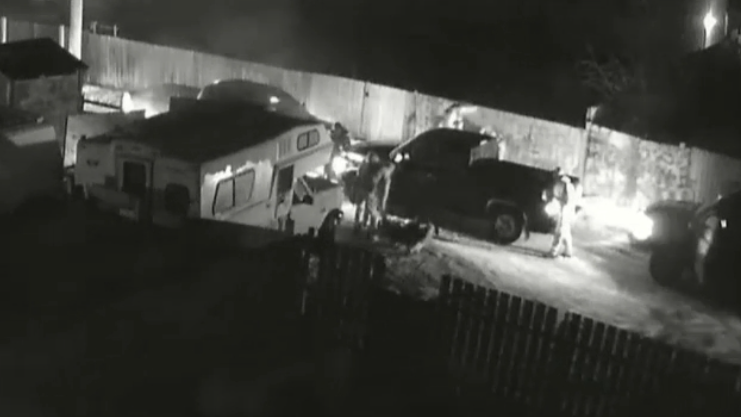 VANCOUVER -- A B.C. man has filed a lawsuit alleging an RCMP officer "encouraged" a police dog to bite him, even as he was face-down on the ground.

The claim comes from Cuyler Richard Aubichon, one of the two men whose 2016 arrests in Prince George recently resulted in charges against three RCMP officers.

Surveillance video of the incident shows police pulling Aubichon and another man out of what authorities allege was a stolen pickup truck on a snowy February night. A police dog can then be seen lunging repeatedly at one of the suspects.

Aubichon's lawsuit, which was filed last week in B.C. Supreme Court, alleges Const. Joshua Grafton let the dog bite him "continuously," and that the officer did not intervene even though he could hear the suspect "screaming in agony and begging Grafton to stop the dog."

Grafton also punched, elbowed and kicked Aubichon while he was on the ground, and struck him on the head multiple times with a baton, according to the claim.

It alleges Aubichon suffered several physical injuries – including bleeding from the back of his head and bite marks on his hand and face – as well as "emotional distress, humiliation, shame, and embarrassment" as a result of the arrest.

None of the claims have been proven in court. The defendants in the case, including the federal attorney general and the minister of public safety and solicitor general, have not filed statements of defence in the case.

A spokesperson for the B.C. RCMP said the force had not been served a notice of the lawsuit and could not comment on the allegations.

"Once received, we will review the claim with the Department of Justice and enter our response officially in court. Given this matter is now before the court, it would be inappropriate to comment further," Staff Sgt. Janelle Shoihet said in an email.

Last month, Grafton was charged with assault, assault with a weapon and obstruction of justice in connection with the February 2016 arrests.

Two other officers – Const. Wayne Connell and Const. Kyle Sharpe – were charged with assault causing bodily harm. All three are scheduled to appear in court on Aug. 12.

The force launched internal Code of Conduct investigations after video of the arrest first surfaced, but it's unclear what the outcomes were. The RCMP said the matters "have concluded and are subject to the Privacy Act."