Rapid tests could have prevented half of B.C. care home deaths in 2020, modelling suggests 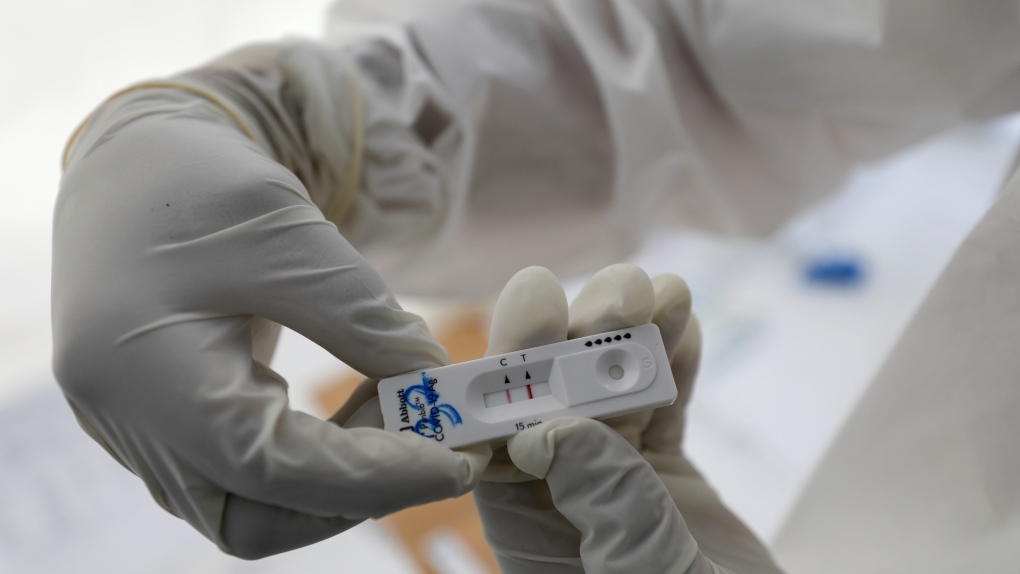 A medical worker holds a rapid COVID-19 test showing a positive result, at a testing site set up by the city department of health outside the Pino Suarez subway station, in central Mexico City, Friday, Dec. 4, 2020. (AP / Rebecca Blackwell)

VANCOUVER -- Researchers at Simon Fraser University estimate that rapid testing for COVID-19 - if it had been available - could have prevented as many as half of the deaths from the disease in long-term care and assisted-living facilities in B.C. in 2020.

The research - shared Friday by SafeCare BC, an industry association that advocates for care workers in the province - looked at two possible scenarios for using rapid tests in long-term care and modelled what the outcome of each scenario might be.

The first scenario considered testing care home staff on a weekly basis, while the second one modelled testing of staff every three days.

The tests being modelled - such as the Panbio COVID-19 Ag Rapid Test - are considered to be 90 per cent accurate, according to SafeCare BC.

Given these assumptions, the modelling suggested that weekly testing of staff members would have prevented between 25 and 40 per cent of COVID-19 outbreaks that occurred at care homes in B.C. last year. That equates to somewhere between 150 and 240 fewer deaths in long-term care, on average, according to the research.

Testing staff members every three days would have prevented between 45 and 55 per cent of outbreaks, and somewhere between 270 and 330 deaths, the researchers conclude.

Roughly 600 care home residents died from COVID-19 in 2020, according to provincial data.

Health Canada approved its first rapid test in October 2020, meaning B.C. couldn't have used them in care home settings before then.

British Columbia has several rapid test pilot projects in progress in long-term care homes, prisons and acute-care facilities, but has so far been reluctant to adopt the use of the tests widely.

Provincial health officer Dr. Bonnie Henry and Health Minister Adrian Dix have cited concerns about rapid tests being resource-intensive for the facilities using them, as well as their lower accuracy, as reasons for not adopting the tests more broadly yet.

SafeCare BC and the BC Care Providers Association, meanwhile, have been calling for increased rapid testing for months.

“The tragic outcomes of COVID-19 outbreaks at long-term care homes will continue until we achieve community immunity through vaccination, which we know might take another eight months or more," said Jen Lyle, CEO of SafeCare BC in a news release.

"In addition, the potential for new high-transmission variants to enter long-term care homes in BC is a huge concern, which gives even stronger support for using screening to prevent outbreaks,” Lyle added. “We owe it to those working at and living in care homes to screen workers and visitors with rapid tests.”

The SFU research suggests two main benefits from using rapid tests as a screening tool for staff and visitors at long-term care facilities: First, tests could prevent the coronavirus from being introduced into a care home. Second, when the virus does get introduced, rapid tests allow for faster detection of infections, allowing health-care workers to intervene sooner.

"We should be using all the tools in the toolkit, and rapid screening could prevent a lot of outbreaks,” said Dr. Caroline Colijn, who co-produced the modelling analysis, in the news release. “Rapid tests may not be as accurate as PCR tests, but the comparison here isn't to PCR tests, it's to no regular screening. Rapid tests are accurate enough for screening large numbers of people."

Coljin is a Canada 150 Research Chair in Mathematics for Infection, Evolution and Public Health and professor at SFU. A summary of the research is embedded below.