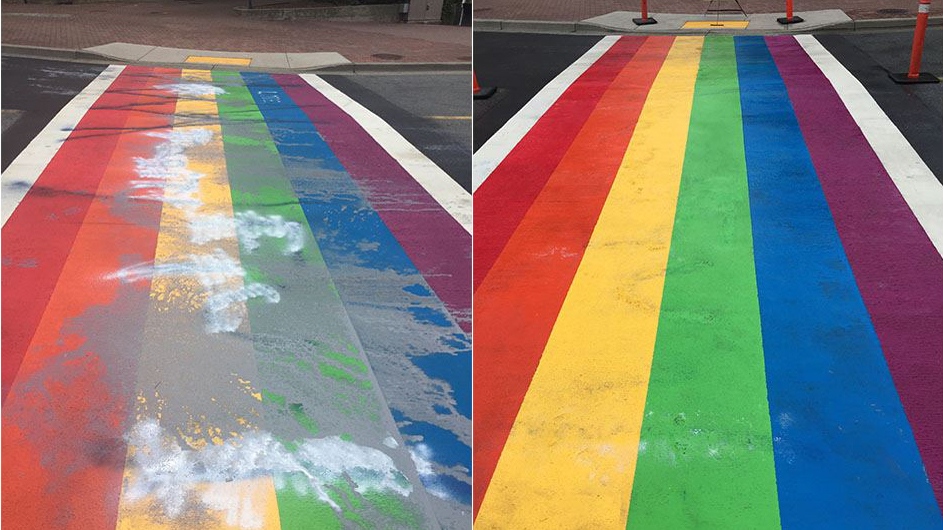 Before and after photos are seen of a rainbow crosswalk that was vandalized in White Rock, B.C. on Aug. 3, 2018.

According to the city, the vandalism occurred at about 12:15 a.m. on Friday.

Mounties notified the city of the incident and workers were sent to the scene at around 6 a.m. By 11 a.m. they had successfully removed the "symbols and words" from the crosswalk, which was first painted in the city's Five Corners neighbourhood in July.

It is unclear from the photos provided what was written on the road.

In a statement, the city said it is "disappointed that such an act has occurred as the message of the rainbow crosswalk is to cultivate kindness, respect, and inclusion."

The incident is being investigated and anyone with information is asked to contact the local RCMP detachment at 778-593-3600.

The news comes as Vancouver celebrates Pride Week, with the 40th annual Pride Parade set to take place on Sunday.

And this isn't the first rainbow crosswalk to be vandalized in the region.

In June, Surrey's first-ever rainbow crosswalk was splattered with what appeared to be white paint.

Rainbow crosswalks have been popping up across Metro Vancouver over the last several years as a symbol of LGBTQ2+ pride.