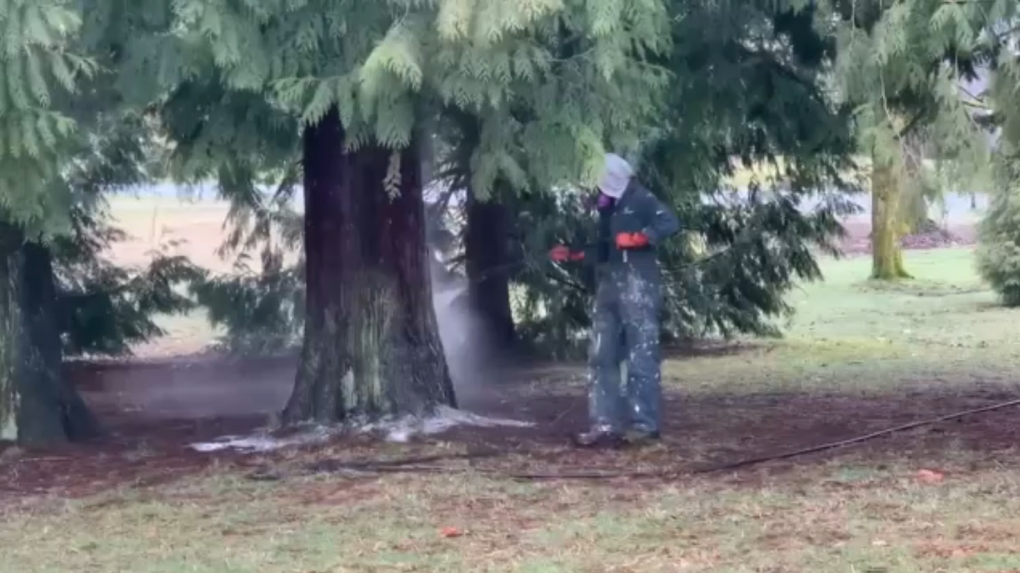 A worker removes racist graffiti from a tree in Riverview Park in Vancouver on Sunday, Feb. 28, 2021. (CTV)

VANCOUVER -- Warning: This story contains images that are offensive and that some readers may prefer not to view.

The Vancouver Park Board says its staff is "heartbroken" after several trees in a city park were defaced with racist graffiti this weekend.

Images of the trees in Riverview Park have been shared on Reddit. Some of the trees have swastikas spray-painted on them, while another has the phrase "White Power."

The vandalism was discovered on Saturday, according to the park board, and at least eight trees were defaced.

"The City of Vancouver and park board condemn these abhorrent acts of racism in the strongest possible terms," the board's Twitter statement continues. "We stand in solidarity with the Indigenous, Black, racialized and Jewish communities targeted by these messages."

Gordon Hawkins was one of the people who encountered the graffiti on Saturday and notified police and the park board about it.

He was in the neighbourhood with his four-year-old son and went to the park to use the playground. He said the defaced trees are in the middle of the park and "very obvious."

"It was really disheartening to see that and, you know, shocking," Hawkins told CTV News Vancouver.

Shocking, but not surprising, he added.

"It seems to be that a lot of people feel like it's OK to have these ideas, lately," Hawkins said. "It's hurtful to see it in the community, for sure."

The park board's statement extends its regrets to residents and visitors to the park, and says that crews are "in the process of safely removing the hurtful graffiti."

"We also acknowledge this as an act of disrespect to the natural world on the Musqueam territory," the park board statement reads.

Anyone who witnessed the incident or has information about it should call 311 to be connected with the Vancouver Police Department or the City of Vancouver's equity office, the park board said.