A widespread public avalanche warning has been issued for mountains in Western Canada.

The warning was released by Avalanche Canada Monday morning, and suggests a dramatic increase in temperatures will increase the likelihood of avalanches.

The organization addressed anyone heading into the backcountry, and applies to large portions of B.C. and Alberta. (See map below)

The warning was prompted by warmer weather and spring break schedules, both of which mean more people will be in the mountains.

"The snow's actually destabilizing very quickly and as a result we're seeing many large natural avalanches starting to creep up on us throughout the mountains of B.C."

He said now is not a good time to be in the mountains, especially at higher elevations. A lack of overnight refreeze encourages the snowpack's move downhill.

Current conditions are not typical of spring, Helgeson said. Usually the snowpack is stable in the morning, but overnight temperatures aren't dipping low enough to refreeze the snowpack.

It's a warning echoed by a local search and rescue group. In a tweet earlier in the day, North Shore Rescue told those heading uphill this spring break to be careful.

The avalanche danger is rated high for alpine and treeline levels of South Coast mountains, and considerable below the treeline.

"The heat is on and the game is changing," Avalanche Canada posted online.

"The strong spring sun and steadily warming temperatures are expected to further destabilize the upper 20 to 30 centimetres of snow and a natural avalanche cycle is very likely. Even deeper avalanches are possible."

The warning comes a day after a driver was caught in an avalanche on Highway 1 near Revelstoke, where the warnings from Avalanche Canada were similar Monday.

In that case, there were no injuries, but a witness said the vehicle would have been pushed down an embankment had there been another few metres of snow.

While the mountains are dangerous, the river forecast centre says streamflow is not a concern during this warm spell. It's been cold long enough that there aren't any real concerns about a sudden melt causing flooding.

Higher temps means increased avalanche danger for the local mountains. This photo taken behind Crown Mountain where you can clearly see surface cracks in the snow. The sheet below ready to release is called “hangfire”. #chopper9 @CTVVancouver pic.twitter.com/kEyo9GCmlM 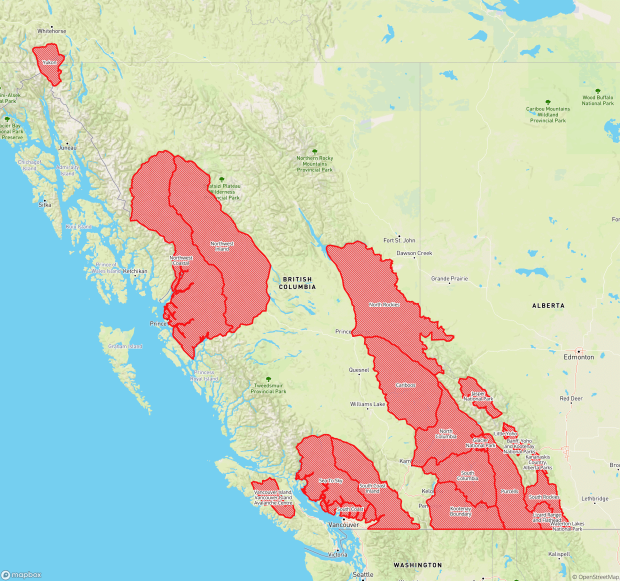 A map from Avalanche Canada shows the areas that fall under a public warning issued Monday.