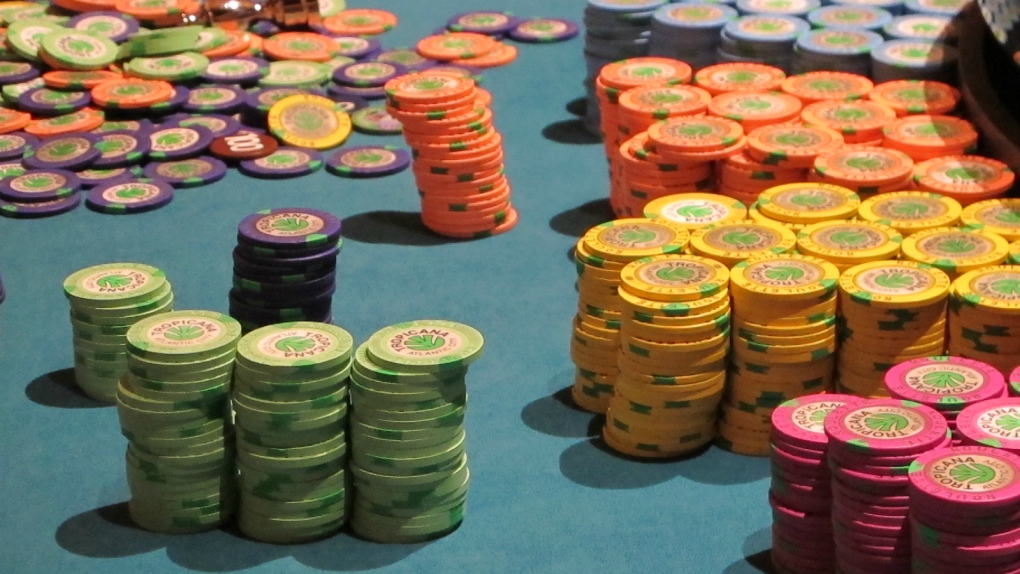 Stacks of gambling chips on a roulette table at the Tropicana Casino and Resort in Atlantic City N.J. on April 17, 2015. (AP / Wayne Parry)

VANCOUVER - Siblings of people with gambling disorders also display markers of impulsivity and risk-taking, suggesting that problem gamblers may have pre-existing genetic vulnerabilities to the illness.

Researchers with the University of British Columbia had a group of 20 people with gambling disorders from the U.K. and their siblings complete questionnaires and computer tests to measure their impulsivity and tendency to take risks.

They also had study subjects get an MRI while playing a slot machine game to measure their brain responses to winning.

Both problem gamblers and their siblings measured higher on evaluations of risk-taking behaviour and impulsivity compared to a healthy control group. For example, they were more likely to be impulsive when experiencing negative emotions—and to put more on the line when making a risky choice.

That suggests something in the way problem gamblers were raised or something genetic could contribute to the disorder.

However, researchers also found signs that problem gambling itself plays a role in changing the brain. For example, the siblings showed no alterations in their neural response to receiving rewards compared to the control group.

The findings were published Wednesday in the scientific journal Neuropsychopharmacology. It was the first paper to investigate gambling disorders by looking at siblings. But researchers noted they were difficult to recruit because family relationships are often strained by gambling problems.

Lead author Eve Limbrick-Oldfield, with the UBC Centre for Gambling Research, said it's known people with gambling disorder show elevated impulsivity, risky decision-making and altered brain reward processing. But it's not known if these indicators existed beforehand or if they're a consequence of a gambling problem.

"It's a chicken and egg problem," she said.

She hopes that her research can help prevention efforts when it comes to gambling addictions.

"The main treatment for gambling disorder is CBT (cognitive behavioural therapy) … that same sort of strategy could be used in prevention."

This research supports existing twin studies that suggest if one twin has a gambling problem there's a higher probability the other twin will have some degree of gambling problems as well, according to gambling addiction expert Nigel Turner with the Centre for Addiction and Mental Health.

"It does tell people who have a risk pattern in the family to be aware, and to take precautions when they're gambling," Turner said.

Turner added some strategies are to limit the amount of money you bring with you and to learn the math behind typical casino cames, since "gambling is a great way to lose money."

Although this research focused on individuals' characteristics, Limbrick-Oldfield wanted to be clear that there are many other factors lead to developing a gambling disorder.

"We know the machines … play a large role in the development of the disorder," she said. "We have to see how the individual interacts with machine, and how we might be able to change the machines to make them less risky."

Other risk factors include lousy childhood experiences and a desire to escape one's problems rather than solve them, Turner added.

The study was conducted in the U.K., but involved UBC researchers from the Centre for Gambling Research, which is funded by the B.C. government and the British Columbia Lottery Corporation.