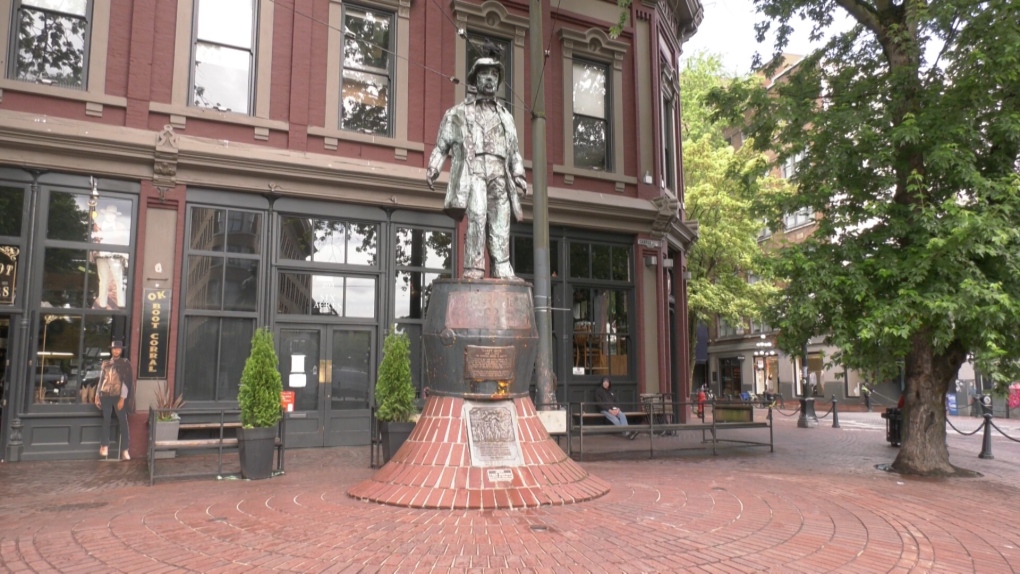 Gassy Jack statue in Gastown after being cleaned by city crews.

VANCOUVER -- More than 5,700 people have signed a petition calling for a well-known Vancouver statue to be taken down.

"Gassy Jack," which is displayed prominently in Gastown, depicts Jack Deighton who opened a bar in the neighbourhood in the late 1800s.

But the petition calls Deighton "a terrible symbol of Vancouver, upholding and honour violence towards and oppression of Indigenous people."

The petition says Deighton "took a 12-year-old Squamish girl to be his wife at the age of 40, impregnating her with his child at her young age."

On Tuesday, the Gastown statue was splattered with red paint, which city crews quickly washed off.

What did Gassy Jack do to deserve this? from r/vancouver

But it's not the only monument that's been defaced by paint recently. Last Thursday, the statue of Capt. George Vancouver that stands outside city hall was covered in blue and grey paint.

The bronze statue was commissioned for the city's Golden Jubilee in 1936 and was done by B.C. sculptor Charles Marega, according to the City of Vancouver's website.

Other Metro Vancouver landmarks – like trails and street names – have also been targeted for change as troubling historical figures have come under scrutiny during the anti-racism movement.

"We are still on unceded territory and what we name and how we name has an impact on not only us, but on those that are still here and were here first," local historian John Atkin told CTV News last week. "It's a colonial history and there are still vestiges that are out in the public sphere."

In fact, statues and place names are being reassessed on a global scale. U.S. House Speaker Nancy Pelosi recently said confederate figures should be removed from the capital and statues have been targeted in New Zealand, England, Belgium and France.

In the case of the Gassy Jack, the petition says removing the statue "is not about erasing history, but about reconciliation."