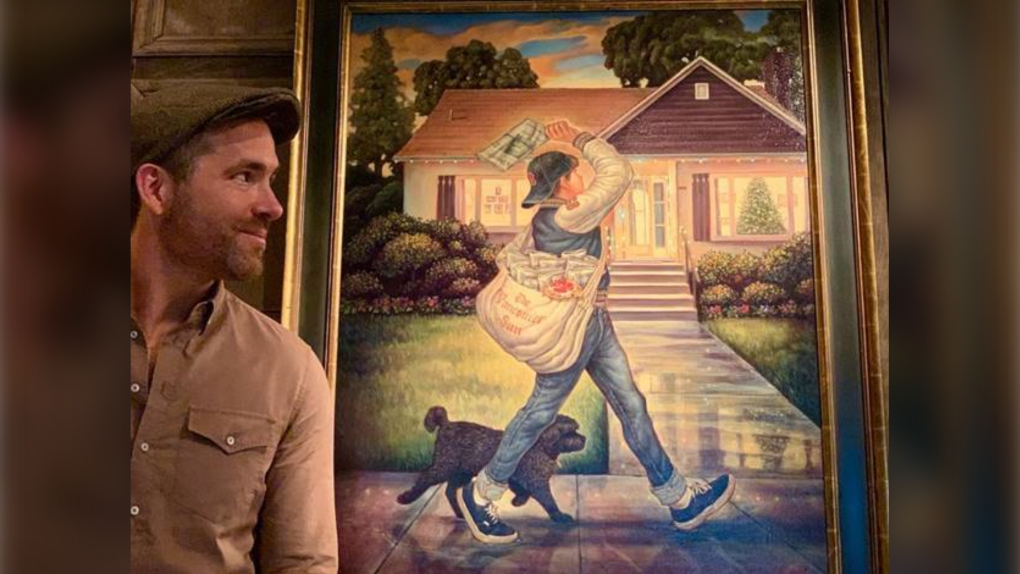 Ryan Reynolds truly is living up to his Instagram handle, @vancityreynolds.

The Vancouver-native posted several photos of a painting which his wife, actress Blake Lively, commissioned as a gift.

The oil painting shows Reynolds delivering newspapers for the Vancouver Sun, which he said was his first job.

"The house in the painting is my childhood home. My brothers and I spent years trying to kill each other on the lawn," the post reads. "The house no longer stands but it's a living, breathing thing in my head."

The painting has several "Easter eggs" that have special meaning to him, including a front-page story of John Candy, whom he calls his idol.

Some fans commented on the post speculating that Boston may have been where Lively and Reynolds met.

But a video posted by artist Danny Galieote sheds some light on that matter.

The video shows how Galieote was able to bring the young Reynolds to life and in several of those childhood photos, the actor was wearing a Red Sox cap.

Some other Easter eggs are less obvious. Like, why is there a strawberry treat in the carrier?

But in true Vancouver fashion, Reynolds was delivering newspaper in the rain which is clear from the wet pavement and raindrop by his head.

Reynolds' post garnered attention from a couple other notable Canadians.

Michael J. Fox wrote, "I was a paper boy for the Burnaby Columbian, flinging the Vancouver Sun was the big league. Quit flexing," while Sarah McLachlan posted, "She's a keeper."

Reynolds' also acknowledges the painting is the "greatest present" Blake has ever given to him.

So much so, he ended the post with this: "If there's ever a fire, I'm grabbing this first. I'll come back for Blake."

This isn't the first time the Hollywood actor has provided a glimpse into his Vancouver childhood.

In March, he posted a newspaper clipping showing him enjoying Kitsilano pool when he was a toddler.