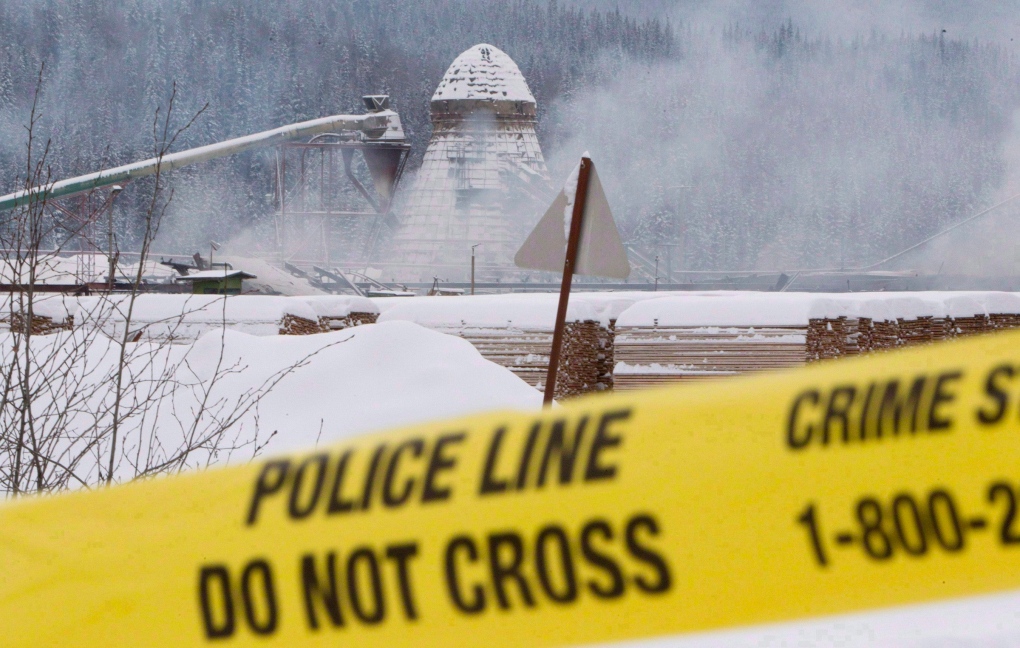 VICTORIA -- A fiery explosion at a British Columbia sawmill that killed two workers and hurt 19 others has resulted in what's believed to be the largest penalty imposed on an employer in provincial history, Labour Minister Shirley Bond said.

But the more than $1 million in fines and fees against Hampton Affiliates, the owners of the Babine Forest Products sawmill in Burns Lake, B.C., isn't enough for the widow of one of the dead workers.

Maureen Luggi, whose husband Robert was killed in the January 2012 blast, said Thursday that the fine isn't acceptable and she still wants an independent inquiry into the cause of the explosion.

"It doesn't even come near the value of the loss, the injury and the impact that this has had on the community and families of Babine Forest Products," she said in an interview.

Luggi and other victims of the blast and the Opposition NDP have called on the B.C. government to hold a public inquiry to examine the cause of the blast and review the subsequent investigation.

Carl Charlie, 42, was also killed in what some of the surviving workers described as a terrifying inferno.

A report on the cause said the blast was preventable, but no charges were laid after B.C.'s Criminal Justice Branch declared that flaws in the original investigation greatly diminished the likelihood of a criminal conviction.

The levy authorizes the agency to collect compensation for death or injury, and the money will be deposited into an accident fund.

The WorkSafeBC statement said the actual claim cost associated with the incident is nearly $5.2 million.

"The dollar value of a penalty or levy does not and cannot reflect the loss of lives and the pain and suffering of workers and families," a WorkSafeBC news release said.

Employers, workers, an owner, a supplier, a union or a member of a deceased worker's family can appeal a penalty or claims cost, WorkSafeBC said.

A written statement from Hampton Affiliates said the company was disappointed to learn of the fine and would be appealing.

The statement noted that the Crown said Babine's due diligence in managing risks was enough to counter charges recommended by WorkSafe.

"For WorkSafeBC to now propose a significant administrative penalty seems disingenuous, especially in light of this record, and the fact that WorkSafeBC must weigh the same considerations of due diligence as the Crown."

Any Dispute between the company and WorkSafeBC shouldn't be taken out of context, the statement said.

"Our sorrow, both for our people impacted and the community of Burns Lake, will always be present. Since the accident, Babine has worked with other industry leaders to analyze dust risks and develop related processes to ensure this will never happen again."

Bond said that no amount of fine or penalty comes close to healing the wounds of the victims and their families.

"No one needs to suggest that any kind of monetary value, no matter what the number is, will ever bring comfort to the families," she said. "I want to assure you this is a rare occurrence. The size (of the penalty) is probably the largest penalty ever levied in British Columbia."

Bond said the penalty does not amount to the costs of the WorkSafeBC investigation.

"Premiums are paid to cover this," she said. "This is a levy on top of the premiums the company has paid."

After learning of the fine, NDP Leader Adrian Dix renewed his call for a public inquiry into the deadly explosion.

"The fines, 90 per cent of them are cost recoveries for WorkSafe, which was clearly their priority, only 10 per cent of them represent a fine to Hampton for the death, the killing of two people and the injury of 19," he said.

Late last month, the B.C. government announced a safety plan would be put in place to try to prevent other sawmills from exploding.

The government said the number of inspectors would be doubled to 20, and a plan would be implemented to limit the potential for combustible dust.

A report issued in January said the mill explosion could have been prevented. Investigators found the company knew it had an inadequate dust collection system, even after a similar explosion and fire a year earlier.

No charges were laid in the blast, in part, because the Crown said investigators failed to obtain search warrants or warn witnesses of their charter rights before taking their statements.