Number of COVID-19 patients in B.C. hospitals up by more than 100 since last week

Number of COVID-19 patients in B.C. hospitals up by more than 100 since last week

The number of COVID-19 patients in B.C. hospitals climbed again over the last week, according to data from the B.C. Centre for Disease Control.

As of Thursday, there were 485 test-positive COVID-19 patients in provincial hospitals, up more than 100 from 364 the previous week. That total includes both patients with severe illness from COVID-19 and those who were hospitalized for other reasons and tested positive incidentally. 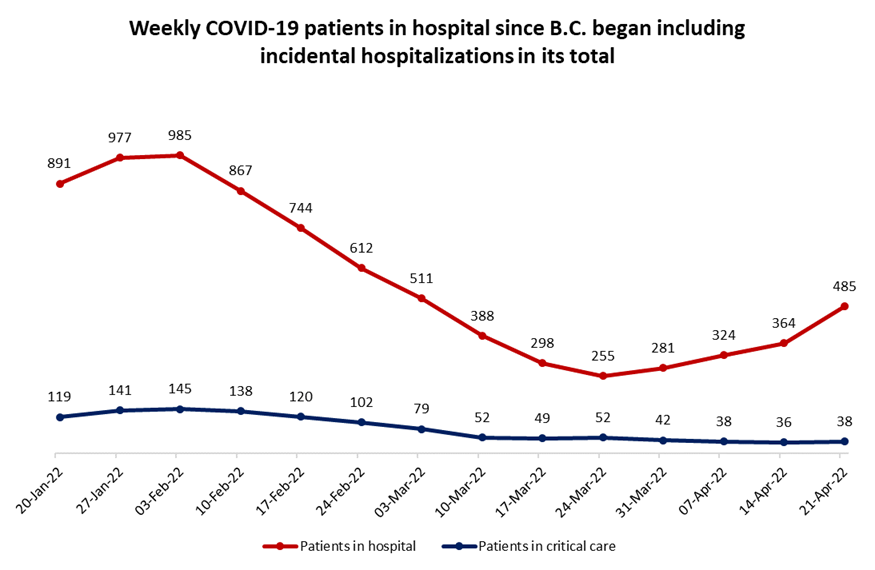 This graph shows the number of COVID-19 patients in hospital each Thursday since the B.C. began including incidental COVID-19 cases in its hospitalization total in mid-January. (CTV)

Since the province began including incidental cases in its hospitalization count in mid January, the total number of people in hospital on Thursdays has been as high as 985 and as low as 255.

The number of patients in critical care has increased slightly in the last week, going from 36 to 38.

The increase in hospitalizations follows the trend seen in B.C. and around the country in recent weeks, as Canada deals with a sixth wave of coronavirus infections driven by new subvariants of Omicron and the elimination of nearly all public health measures aimed at limiting transmission.

Experts and health officials have said an increase in cases was expected, and B.C.'s provincial health officer Dr. Bonnie Henry has described a return to COVID-19-related restrictions as "a last resort" and expressed hope that it won't be necessary.

Thursday's update from the BCCDC includes weekly numbers of newly confirmed cases, hospitalizations and deaths for the period of April 10 to 16.

The data comes with a lot of caveats, however. First, and foremost, it's nearly a week old. The only data the BCCDC releases that is current as of Thursday are the hospitalization and critical care numbers mentioned earlier and shown on the graph.

The BCCDC numbers include only "lab-confirmed, lab-probable and epi-linked cases," however, meaning cases confirmed through at-home rapid antigen testing are not included in the total.

Because most British Columbians do not qualify for PCR tests under the province's current testing strategy and the results of rapid antigen tests are not collected or released, the true number of infections in the province cannot be known.

Likewise, the BCCDC's weekly report indicates that the province saw 238 new hospital admissions from April 10 to 16, but that number is expected to increase "as data become more complete."

The 238 new hospitalizations reported Thursday are slightly more than the 233 initially reported last week for the period of April 3 through 9. This week's report revises that week's total up to 289.

Deaths are a similar story. The BCCDC says 27 deaths were recorded from April 10 to 16, but that number is likely to increase. From April 3 to 9, the centre initially reported that there were 23 deaths, but that total has now been revised up to 37.

The true number of deaths caused by COVID-19, however, is likely lower, since the province recently shifted to reporting "30-day all-cause mortality," a metric that includes anyone who tested positive for COVID-19 within 30 days of their death as a COVID-19-related death.

Each of these metrics - cases, hospitalizations and deaths - appears to be trending upward, a conclusion supported by wastewater surveillance data in the Lower Mainland, which has shown increasing concentrations of COVID-19 for several weeks, according to the BCCDC's latest weekly "situation report."

The vast majority of those doses were second doses or boosters. Only 2,177 of the shots administered were first doses.

BCCDC data shows unvaccinated people remain overrepresented - relative to their share of the population - among those experiencing severe outcomes from COVID-19 such as hospitalization, critical care admission and death.

Looking specifically at those ages 70 and older, who are among those at greatest risk of death from COVID-19, BCCDC data shows a significant gap in the rates of death between the unvaccinated and those who have received three doses.

The number of boosted seniors whose deaths were attributed to COVID-19 between March 20 and April 16 dwarfs the number of unvaccinated people who died in the same age group.

There were 62 deaths during that time period among boosted people ages 70 and older, compared to just nine among the unvaccinated.

Accounting for the relative size of the two populations, however, reveals that unvaccinated seniors were more than twice as likely to die as triple-vaccinated ones.