Two probes on my fingers measured my microsweat, temperature, and heart rate. An electrode on the top of my head recorded brain electrical activity. A band around my stomach and a sensor on my shoulder measured my breathing and muscle tension.

This may sound like an elaborate medical test, but I was actually undergoing a psycho-physiological assessment to find out just how mindful I am at one of Vancouver’s newest meditation studios, Moment Meditation.

“What we’re trying to do is reframe the conversation around meditation,” said Anita Cheung, co-founder of the studio that made its Gastown debut in October 2016.

“I’ve started jokingly saying that it isn’t your weird aunt’s meditation from the seventies - it’s very modern, and we’re approaching it from a level of cognitive training. We train our bodies, and now we train our minds.”

While historically seen as a practice for granola-munching hippies, the health benefits of meditation have been increasingly documented in the literature over the last decade. These include improvement in concentration and attention, decreased anxiety, help for those suffering from addiction, lower blood pressure and a stronger immune system.

Moment Meditation focuses on combining this scientific research with the peace and calm meditation is typically known for. Besides offering a wide array of classes, the studio gives clients the option of undertaking a psycho-physiological assessment to discover their mindfulness quotient (MQ) score, a number that reflects stress response and ability to stay calm under pressure. 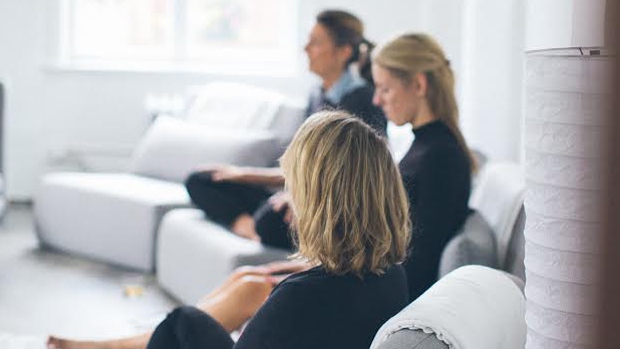 Cheung, who is a yoga therapist, laughs as she recalls how she used to resist anything “airy fairy,” until struggles with her own mental health changed her mind.

“My experience with meditation came about after some mental health struggles in my early twenties with depression, anxiety, and as dark as it is, suicide,” she said.

“When I was introduced to meditation it was with a clinical psychologist so I trusted and believed her, and it was very, very life changing.”

As someone trying to expand my own meditation practice – but struggling to do more than 10 minutes a day – the MQ test appealed to me. Was I meditating “right”? Was there a way to measure that?

The premise of the test was simple: I was hooked up to various electrodes, then told to relax and breathe deeply while undergoing intermittent periods of stress. For example, basic math problems flashed across the screen and I was instructed to answer out loud.

“Faster, do this as fast as you can,” my tester urged, her intensity a stark contrast to the zen atmosphere of the Moment Meditation studio. “You’re going to have to go faster than this.”

In between each stress interval I was instructed to breathe deeply and relax, a task made easier by the orange scented candles burned peacefully in the background. 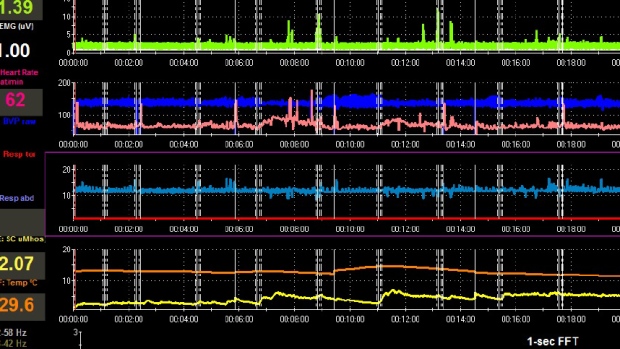 A few days later my results were emailed to me, with an explanation of what my score meant (I will not be disclosing my results, but I am proud to say I didn’t fail - apparently that’s not possible).

An algorithm compared my psycho-physiological data when I was stressed to when I was focusing on being calm, and the results were intriguing. For example, I learned I recover at rates above average when stressed (years of being a newsroom environment, perhaps?) but could improve my ability to ignore distractions. Good to know.

“We’re jokingly calling this test ‘the Fit Bit for meditation’, because it gives you an idea of what happens to your body when you’re stressed,” said Cheung after my MQ test.

“A lot of us live very stressed day to day, and we can access that state of calm with deep breathing, with mindful activities - and with mindfulness in general.”

My MQ test inspired me to continue my burgeoning meditation practice, and potentially even take a few classes in the calming Moment Meditation studios. According to Cheung, even 10 minutes of meditation a day can have huge benefits in daily life.

“One of our prime goals is to make meditation modern, simple, and accessible,” she said.

“I think when some people first start meditating they make it really difficult , like okay I have to meditate for 20 minutes and it has to be at 5 a.m…. but if you can even carve 10 minutes a day you will feel a huge difference. Any little bit helps.”