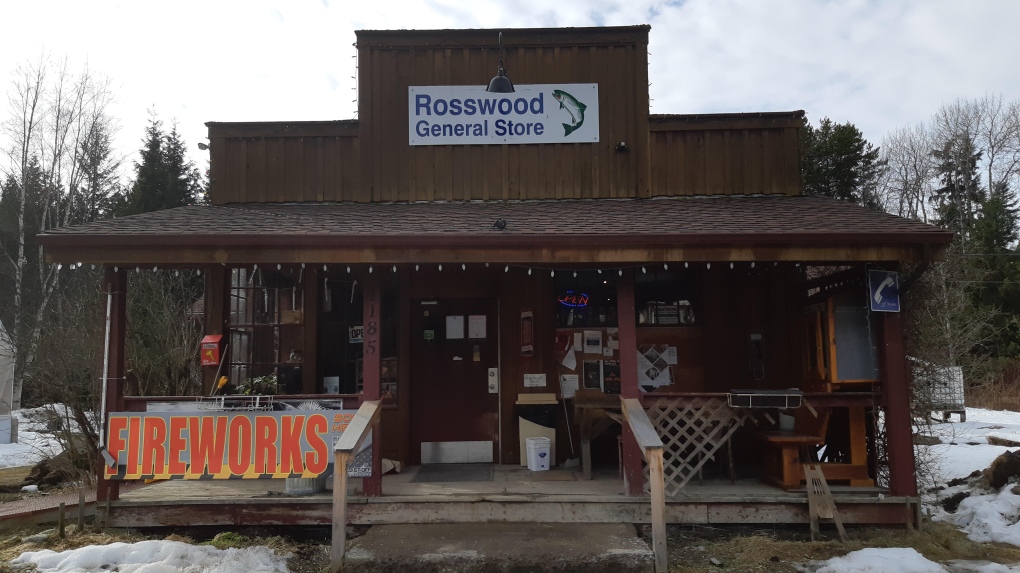 The payphone at the Rosswood General Store hasn’t worked for over six months. (Submitted)

VANCOUVER -- A northern B.C. MP is on a mission to get the pay phone at the Rosswood General Store fixed.

There's no cell service along the highway in tiny Rosswood, a town north of Terrace, B.C.

So when the town's only pay phone stopped working after lightning struck the Rosswood General Store in the summer of 2019, it hit some residents hard – and made that stretch of highway less safe.

Taylor Bachrach, the NDP MP for Skeena-Bulkley Valley, first got an earful about the broken phone in September 2019, when he was campaigning for the upcoming federal election.

"There`s a covered porch on the front of the Rosswood Store and there was an older gentleman sitting there," Bachrach recalled. "I was in election mode, so I went and introduced myself and we had a little chat and I told him I was running for MP.

"He said, 'So, you want to be in a position of influence – you can start by fixing this damn pay phone, it hasn`t worked since lightning hit the store a couple months back.'"

After that conversation in September, Bachrach made a call to Telus, and the company sent a contractor out to fix the phone. But this Friday when he was travelling through the area again on his way to the Nass Valley, Bachrach stopped in at the general store and picked up the pay phone that's mounted on a wall outside the store. All he got was static.

Bachrach took to Twitter to ask for "100 (retweets) to convince Telus to finally fix the payphone at Rosswood General Store. Seems useful on a stretch of highway that still lacks cell service.

"Plus," he added, "old Bob misses it." (Bob is the man who first told Bachrach about the problem.)

Can I get 100 RTs to convince @TELUS to finally fix the pay phone at the Rosswood General Store? Seems useful on a stretch of highway that still lacks cell service. Plus, old Bob misses it. #ruralcommunitiesmatter pic.twitter.com/dISJjO3GgU

Bachrach grew up in a tiny community near McBride, B.C. that is much like Rosswood, and is now his party's critic for infrastructure and community. He said the pay phone problem illustrates the need in many of B.C.'s rural areas for basic infrastructure like water and sewer, as well as access to the Internet and cell phone service.

"There was something about it that made me think about small rural communities and how they get left out in government – Rosswood is about as far away from Victoria and Ottawa as you can get," he said.

On Monday, Telus told CTV News it appreciated Bachrach pointing out the problem and promised to have the pay phone repaired "as soon as possible."

"We hope this is welcome news for old Bob," a spokesperson said in an email.

The telecommunications company also pointed to recent infrastructure investments that have brought its 4G wireless network to every B.C. community with at least 1,000 residents, most recently the Vancouver Island towns of Gold River and Tahsis.

Update: On Tuesday, Telus confirmed a technician visited the pay phone and fixed what the company described as a line connection issue.