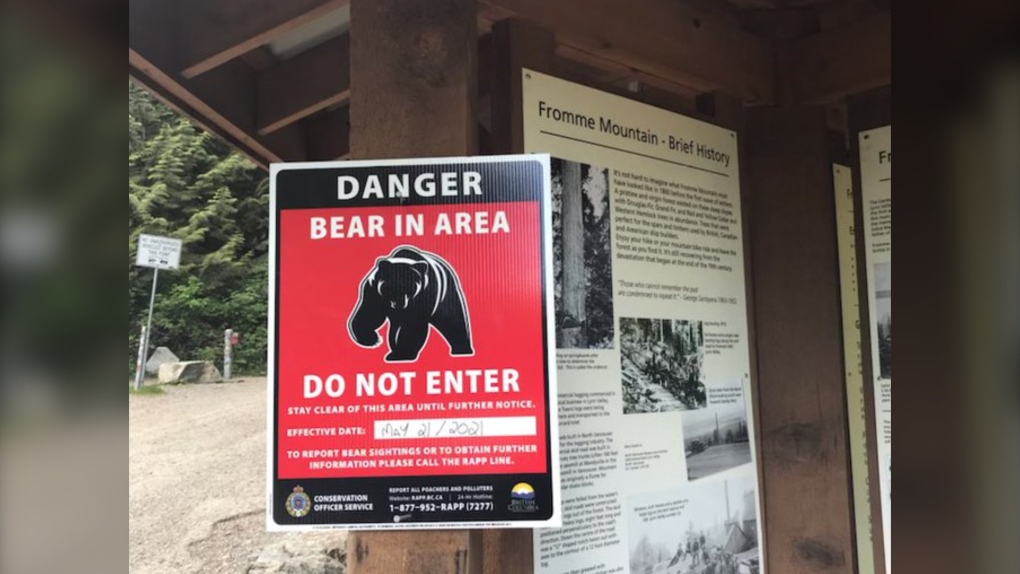 Warning sign seen on a North Vancouver trail on May 21, 2021. (BCCOS/Twitter)

VANCOUVER -- A trail in North Vancouver has reopened days after a bear swiped at a hiker, prompting a warning from conservation officers and local Mounties.

The area had been closed Friday afternoon after officers received reports of an aggressive bear.

B.C. conservation officers said the bear has not been located "despite extensive efforts," but that there have not been any other reports of sightings either.

Fred Hawley told CTV News Vancouver that day that a bear swiped at him on Bills Trail near Mount Fromme and Upper Lonsdale. He and his wife were about six kilometres up the trail when they came across a black bear.

Hawley said at the time the bear followed them, then started to circle them. The animal then swatted at Hawley in the leg, giving him minor cuts. No other hikers were injured.

On Sunday, the B.C. Conservation Officer Service posted on Twitter saying the bear involved in the attack hadn't been found yet. Officers were still investigating the incident at that time.

The BCCOS says anyone who encounters a bear should remain calm and slowly back away, talking to the bear in a quiet voice.

"Do not scream, turn your back on the bear, kneel down or make direct eye contact," the BCCOS says. "Make sure the bear has a clear escape route. After the bear is gone and it's safe, make sure there is nothing in the area that will attract bears back again."

In the first four months of the year, the BCCOS received 973 calls about black bears, according to provincial data. Officers responded to 128 of those calls.