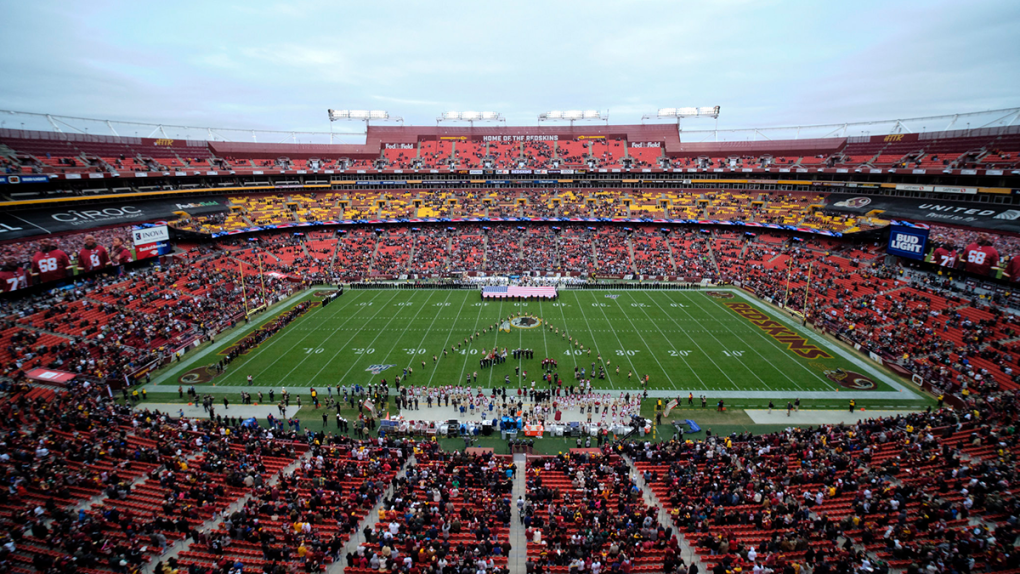 FedEx Field is seen in this general view during the National Anthem prior to an NFL football game between the New York Jets and Washington Redskins, in Landover, Md., Nov. 17, 2019. There were more than 20,000 empty seats for the Redskins’ last home game, and when many of them have been filled this season, it's with fans of the visiting team. (AP / Mark Tenally)

LANDOVER, Md. - No matter how loud the chants of "Sell the team!" directed at Daniel Snyder were, no matter how sadly empty the stadium was, no matter how poorly his Washington Redskins are playing, no matter how unsuccessful his ownership has been for two decades, there's no reason to believe he'll heed that demand.

Still, it's hard to imagine things getting any worse for a franchise that won three Super Bowls forever ago and could very well end up at 1-15 this season.

The latest debacle for the Redskins came Sunday, manhandled by a bad New York Jets team that led by 31 points before a couple of meaningless late scores ended Washington's club-record drought of 16 quarters without a touchdown - and the longest such no-TD span in the league in 19 years. The final tally: Jets 34, Redskins 17.

Making the lacklustre showing even worse: Washington was coming off a bye.

The first home start of first-round draft pick Dwayne Haskins' professional career was nothing to be celebrated by the Redskins, who trailed 20-3 at halftime after being outgained 262-60 in total net yards and managing just three first downs to New York's 16.

"We did the best we could," said interim coach Bill Callahan, who took over after Jay Gruden was fired at 0-5, "but to no avail."

And remember: These Jets came into the day with the NFL's worst offence and a 2-7 record. They left looking like the Greatest Show on Turf.

Sam Darnold threw a career-high four TD passes against a Redskins defence that's been a disaster throughout their 1-9 start.

All the while, choruses of "J-E-T-S!" rang out near the visitors' sideline, leading Darnold to note: "It was awesome to have our fans out there like that. Almost felt like a home game."

It's a far cry from the home-field advantage the Redskins enjoyed in the old days at RFK Stadium in D.C., back when the fans would make the stands bounce. Oh, and back when the team was competitive. Was good, even. Or, seen through another prism, really mattered.

Now the area has recent winners in other sports - from, in order, the Stanley Cup champion Capitals to the WNBA champion Mystics to the World Series champion Nationals.

Under Snyder's stewardship, and with the help of right-hand man Bruce Allen, the Redskins are bad on the field and one flub after another off it, too.

No wonder fans stay away or sound fed up.

Here are other top topics after the 11th Sunday of the NFL season:

Coach Jon Gruden and GM Mike Mayock have a special rookie class with the Oakland Raiders, despite first-rounder Johnathan Abram being out since Week 1 with a shoulder injury. Two weeks ago, the Raiders were the first team in four years to have rookies score all four TDs in a win. And now, after Maxx Crosby's four sacks and Josh Jacobs' latest 100-yard rushing day helped Oakland top the Cincinnati Bengals 17-10 to improve to 6-4, the Raiders are the first team since sacks became an official stat in 1982 to accumulate at least 10 sacks and 10 touchdowns from rookies in a season's opening 10 games. "The poise and the production and the professionalism that they play with, and come to work with," Gruden said about his rookies, "is something that everybody would be impressed with."

Postgame questioning of NFL officiating decisions doesn't seem quite as taboo as it used to be. Take Sunday, when one particularly egregious miss on pass interference led the receiver involved, Houston's DeAndre Hopkins, to tweet that "we need someone new in New York deciding calls," and his coach, Bill O'Brien, to lament after the Texans were drubbed 41-7 by the Baltimore Ravens, "I have no idea what pass interference is anymore. No idea."

While Cleveland's Freddie Kitchens and Atlanta's Dan Quinn's modest two-game winning streaks might help them save their jobs, it'll be fascinating to keep tabs on what happens with some other coaches whose teams do not appear to be putting up much of a fight down the stretch. Kitchens could get a second year, but there are a couple of other one-and-done possibilities: Zac Taylor, whose Bengals appear to be giving their best shot at going 0-16, and Vic Fangio, whose Denver Broncos blew a 20-point halftime lead in a 27-23 loss to the Minnesota Vikings and are 3-7. Denver's opponents have now erased fourth-quarter deficits to win four times, hardly a good sign for defensive-minded Fangio.

There were four London games this season, and the eight participating teams were all given a bye the following week - and then proceeded to go 0-8. The latest to flop after returning from overseas were the Texans and the Jacksonville Jaguars.