Seahawks hope Lockett will be ready for Sunday vs. Philly 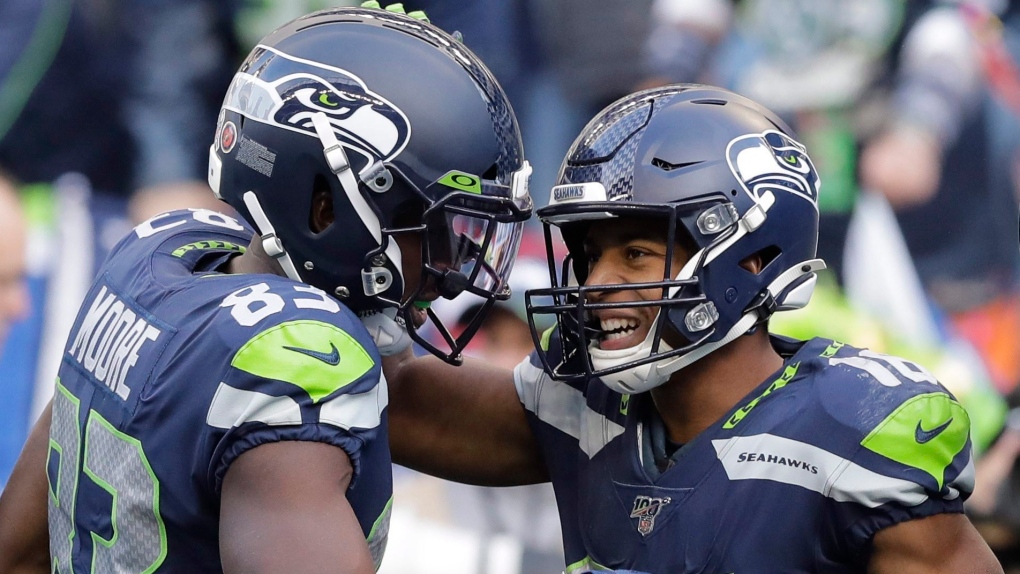 Seattle Seahawks wide receiver Tyler Lockett, right, is greeted by wide receiver David Moore (83) after scoring a touchdown against the Tampa Bay Buccaneers during the second half of an NFL football game, Sunday, Nov. 3, 2019, in Seattle. (AP Photo/John Froschauer)

The Seahawks returned to practice on Monday following their bye week with Lockett not on the field during the portion of practice open to reporters. But Carroll sounded hopeful the severe lower leg contusion suffered by Lockett in Seattle's 27-24 overtime victory will have subsided enough for the Seahawks' leading receiver to be available for Sunday's game at Philadelphia.

“He's doing better. We'll know later in the week his status. We're hoping, planning on him being able to play, but he has to show us, so we'll see,” Carroll said.

Lockett was injured sometime late in the victory over the 49ers that improved Seattle to 8-2. His last reception - and target - came with about six minutes left in the fourth quarter on an 8-yard catch. Lockett appeared to have a limp for the next couple of plays, but he remained in the game for the rest of Seattle's drive that ended with a 46-yard field goal by Jason Myers. Lockett also fielded the final kickoff by San Francisco in regulation, but when overtime arrived, he was a spectator.

Lockett remained in the Bay Area at Stanford Hospital after the victory and spent an additional night there before being allowed to return to Seattle.

“They wanted to take an extra day to just ensure that he was fine and all that. He really is on the road to recovery now. He's past that. That was just the initial concern,” Carroll said. “We were very fortunate that he was at a great place and they took great care of him and all that, and everything worked out fine. Now he's on the road back and we're optimistic about it but he's still going to have to do it. The extra days are absolutely helping us.”

Lockett has become the favourite target of Russell Wilson this season, with 62 receptions for 793 yards and six touchdowns. The three receptions Lockett finished with against San Francisco was his fewest since Week 1, when he had just one catch against Cincinnati.

While Seattle is optimistic it will have its leading receiver available against the Eagles, the Seahawks are thin at tight end. Luke Willson suffered a hamstring injury against the 49ers and Carroll said it's unlikely he'll be able to play this week, leaving Jacob Hollister as the only healthy tight end on the roster. Seattle has Ed Dickson on injured reserve and Carroll said it's possible Dickson, who returned to practice a couple of weeks ago, will be added to the active roster. Seattle must decide whether by Wednesday whether to activate Dickson.

“We've been waiting for an opportunity to get Ed going,” Carroll said.