VANCOUVER -- For weeks over the summer, Canada was gripped by three chilling murders in northern B.C. and a nationwide manhunt for two B.C. teenagers who police say confessed to all three killings on video before dying by suicide.

Now, a series of search warrant applications filed by Mounties in court during the manhunt and obtained by CTV News are revealing new details – and raising new questions – about the search for 19-year-old Kam McLeod and 18-year-old Bryer Schmegelsky.

Teens texted with family after killing

The two young men left their homes in Port Alberni on July 12. The bodies of Chynna Deese and Lucas Fowler were found three days later on Highway 97 near Liard Hot Springs, and the body of Leonard Dyck was found four days after that south of Dease Lake.

McLeod and Schmegelsky were listed as missing by RCMP on July 21 and named suspects in Dyck's death just two days later. Before that, the warrant applications show McLeod had been in touch with family members and that nothing seemed unusual.

In the first few days after leaving Port Alberni, McLeod had even sent several photos of places they were travelling to. The idea, his family believed, was that he and Schmegelsky were headed to Whitehorse to look for work, after they had quit their jobs at Walmart.

On July 15, the documents show, Schmegelsky's mother received a text message from him at about 7:45 p.m., around 12 hours after the bodies of Deese and Fowler had been found. That was the last communication sent from Schmegelsky's phone, but it’s unclear what the message said.

The last communication McLeod's family received from him was on July 17 at about 3:30 p.m. A deposit was also made into his bank account by someone at a Port Alberni BMO branch, but the amount is unknown.

Before that, on July 15, he had texted his family simply stating "In Whitehorse."

After leaving Port Alberni, McLeod also had minimal contact with his girlfriend, who according to the warrant applications told police he and Schmegelsky had been saving up to travel to Whitehorse. She said it didn't seem like the two boys had much of a plan, but that they were heading to the area to get a job in a camp.

McLeod's girlfriend told RCMP she got a message from him on July 13. She asked McLeod why he left without telling her, to which he responded by text message "Seriously sorry but I'm not coming back."

The last time she spoke with McLeod was on July 14 at about 8 p.m. All McLeod would tell her was that they were "on the mainland" and then hung up the call, the documents say.

The documents also suggest that Schmegelsky didn't have a girlfriend, but was interested in McLeod's sister. In fact, he had attempted to start dating her, but was rejected, which his grandmother said he was upset about prior to leaving Port Alberni.

Both teens were described by family members as "introverted, loners and gamers." 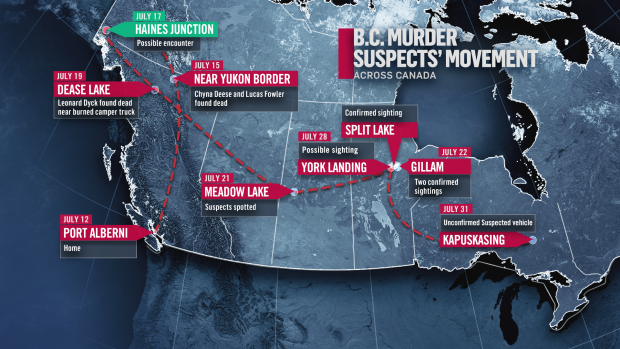 One thing still missing from the warrant applications are any indication of a motive. In fact, one warrant application dated Aug. 2 says "the motive for the murders are not yet known to police, resulting in the belief that the identified suspects pose a significant risk to public and police safety."

But the documents provide insight into how police pieced together their timeline, while still searching for the suspected killers. They include a never before seen surveillance image from the Cabela's recreation store in Nanaimo, where the pair bought a Soviet SKS long gun configured to fire 7.62 x 39 mm ammunition rounds on July 12. After the two had left home, it wasn't believed they had a firearm, and even though the warrant applications indicate the McLeod family had a locked gun safe "with a number of long guns," none of them were believed to be missing. 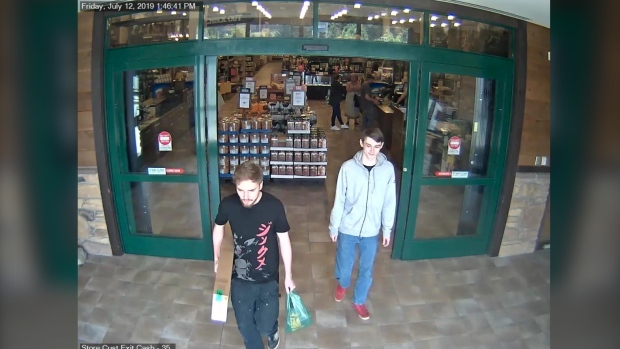 On Thursday, the RCMP confirmed to CTV News McLeod had purchased the second weapon used in the murders – an older SKS rifle – along with 750 rounds of ammunition at a small, retail outlet in Port Alberni on July 12 as well. They also confirmed the ammunition purchased at the store was used in all three murders.

Meanwhile following a search of the Schmegelsky residence, several items were seized including two maps of Alaska and northwest Canada, one of which had markings near Dease Lake and Alaska.

Few details were given about the deaths themselves, except that Deese and Fowler had died from gunshot wounds. Details about Dyck's deaths were heavily redacted in the documents, but they do say based on the injuries, investigators believe an "edged weapon as well as a firearm" was used. At one of the scenes connected to Dyck's death, a Walmart ID card with McLeod's name was also found.

These were some pieces of the puzzle pointing investigators to McLeod and Schmegelsky, and the documents also showed how police hoped to continue their investigation after finding the pair.

One warrant document, pointing to the two as suspects in all three deaths says "the investigative team plan to arrest McLeod and Schmegelsky as soon as possible in Manitoba, and conduct structured interview and interrogation (they) are in custody. 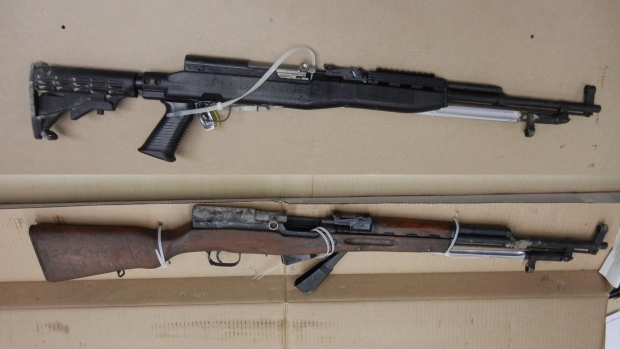 Significant police resources were used in the hunt for McLeod and Schmegelsky in the days leading up to their own deaths, with RCMP saying up to 160 police officers working extended shifts on the investigation until their bodies were found.

Without a clear motive, police said were concerned about the risk to the public and the warrant applications show it's possible there was nearly one other victim.

According to the documents, one man believed he may have had a near encounter with McLeod and Schmegelsky on July 17, between the days when the other victims were found.

Along the Alaska Highway, the man said he pulled off the road to take a nap when a white GMC passed him only five minutes later. The truck stopped about 50 yards in front of him and a male passenger got out of the car with what looked like a long gun.

The documents say the passenger walked towards the tree line when "his body language changed and he started moving toward (him) in a tactical or hunting stance. The passenger slowly crept towards (his) direction which concerned him."

Someone else in the GMC then began driving closer to the man's vehicle so he started his car and drove away from the armed man and the GMC.

Police say they got this report before McLeod and Schmegelsky were publicly named suspects and that Schmegelsky's debit card was used the day after this incident at a gas station on the Alaska Highway near Watson Lake. The warrant documents also say that even though the vehicle was described as a GMC, police believe it was the suspects.

Some details of the investigation into the three deaths were released to the public in September, revealing the RCMP had discovered six videos recorded on a digital camera that was found near McLeod's and Schmegelsky's bodies.

While none of the videos contained information about a motive, Mounties described the teens as "cold" and that they "lacked remorse." Police also said the videos would not be released to the public, but that they hoped the public report would provide "greater clarity into this investigation and search."

"We know this file had impacts provincially, nationally and internationally," the RCMP report said. "Many have been affected, but none more so than the grieving Fowler, Deese and Dyck families."