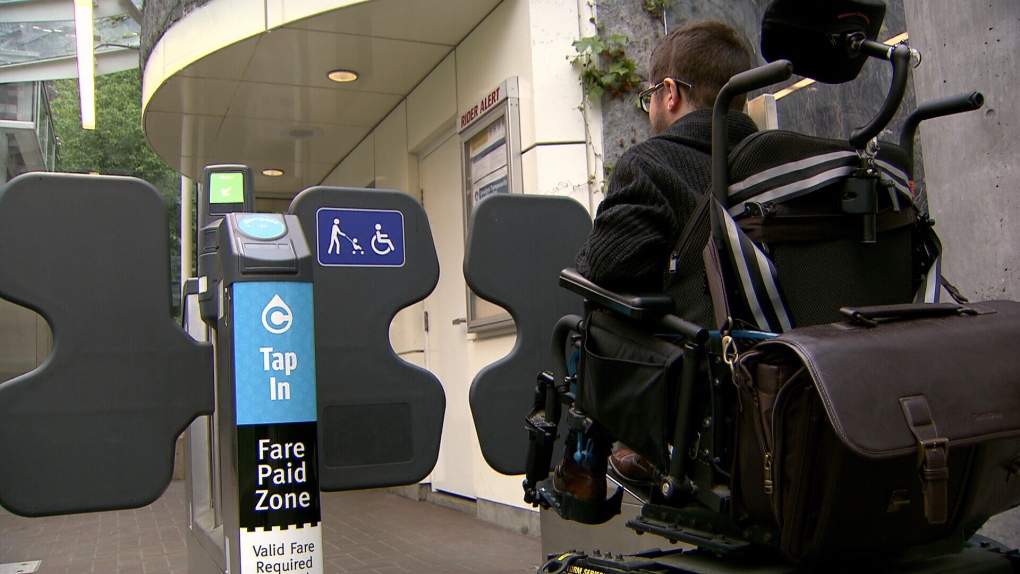 Luke Galvani, who uses a wheelchair, isn’t able to tap himself in, but says he often finds the wheelchair gates closed with no attendants around to help.

On the day he welcomed the latest phase of the Compass card implementation, TransLink’s CEO also revealed he’s working to change the agency’s culture.

Monday was the first day all fare gates in the system were closed. The wider gates for people with disabilities had previously been left open, unless an attendant was on hand to tap the Compass cards of riders with physical disabilities.

They must now either call in advance for help or summon an attendant at the gate, until new proximity sensors are installed at the end of next year. Those sensors will allow them to pay their fare and open the gate without physically tapping the scanner.

“We’re encouraged that TransLink has promised to install proximity readers by the end of next year so we’ll work with the interim measures,” said Jane Dyson, executive director of the Disability Alliance of B.C.

She adds TransLink's new CEO, Kevin Desmond, “has made a great effort to work with us to come up with a solution with these fare gates.”

Desmond, who has been at the post since March, told CTV News, "It’s not easy to get in and out of our system with that level of disability, so we owe it to them to find a way."

The 18-month wait for planning and installation of proximity sensors for people with disabilities is the latest snafu in the Compass card rollout and implementation, which was years behind schedule and $23 million over budget. TransLink’s CEO calls it a “journey,” but says revenues are already up eight per cent since the majority of gates closed April 4, and adds ridership is up two per cent.

TransLink also faced a public relations challenge after a series of service interruptions on the SkyTrain system in recent years, which bruised the agency’s reputation and eroded consumer confidence. An Insights West poll last July found about 76 per cent of people don’t have confidence in TransLink and that’s why they voted down a referendum to increase the sales tax by half a per cent to fund the expansion of transit throughout Metro Vancouver.

Desmond says he’s working hard to change public perception of his organization by encouraging all levels of his staff to focus on their customers. He thinks he’s already made progress in his four months on the job.

“Changing TransLink or any big organization overnight is not an easy thing, so I don’t know that I’ve changed anything per se, but setting a different tone. I come with a lot of transit experience from different jobs and I can help set the tone as leader of the organization about what is important, what we should be focused on. Focus on the customer should be number one and that’s the kind of message I want to send, that I have been sending to our employees.”

It’s a refreshing change to the Disability Alliance, which says its previous efforts to garner change for the people they represent were rebuffed. Dyson says she’s prepared to give TransLink a chance to follow through on their commitments. But her organization is also keeping notes on the usability of the interim measures for people with disabilites to navigate the system.

“We’ll certainly watch to see how they work,” she said.