Nearly half of Canadians never learned about residential schools as students: survey 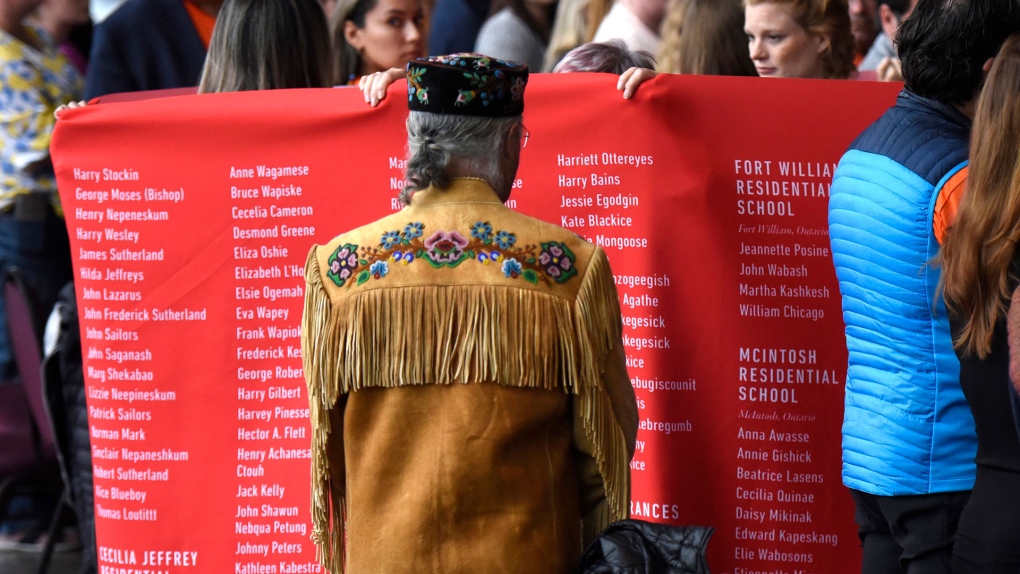 Clement Chartier, president of the Metis National Council, watches as a ceremonial cloth with the names of 2,800 children who died in residential schools and were identified in the National Student Memorial Register, is carried to the stage during the Honouring National Day for Truth and Reconciliation ceremony in Gatineau, Quebec on Monday, Sept. 30, 2019. (THE CANADIAN PRESS / Justin Tang)

VANCOUVER -- Concerning data from a new survey suggests nearly half of Canadians never learned about residential schools when they were students in Canada.

Forty-five per cent of respondents said they did not hear about them, and that jumps to nearly 60 per cent among older members of the population.

"The findings outline some glaring generational differences when it comes to in-class instruction about residential schools," Mario Canseco, president of Research Co., said in a statement Friday.

Forty-one per cent of respondents said they remembered the assessment of the schools as negative, while 25 per cent said they were not sure.

Former Prime Minister Stephen Harper issued a formal apology to former students of residential schools in 2008, calling the treatment of the children a "sad chapter in our history."

The apology noted the goal of the schools was to "remove and isolate children from the influence of their homes, families, traditions and cultures, and to assimilate them into the dominant culture."

"These objectives were based on the assumption Aboriginal cultures and spiritual beliefs were inferior or unequal," the apology reads. It goes on to say the government recognizes the consequences of the school system were "profoundly negative" and have had a damaging and ongoing impact on the heritage, culture and language of First Nations people.

Among British Columbians, 88 per cent say they currently have a negative perception of residential schools. That number drops to 76 per cent among Ontarians, and 57 per cent among respondents from Quebec. ​

The results are based on an online survey conducted from Aug. 7 to 9, 2020 among 805 adults who attended elementary or high school in Canada.

The data has been statistically weighted for age, gender and region in Canada. The margin of error, which measures sample variability, is plus or minus 3.5 percentage points, 19 times out of 20.