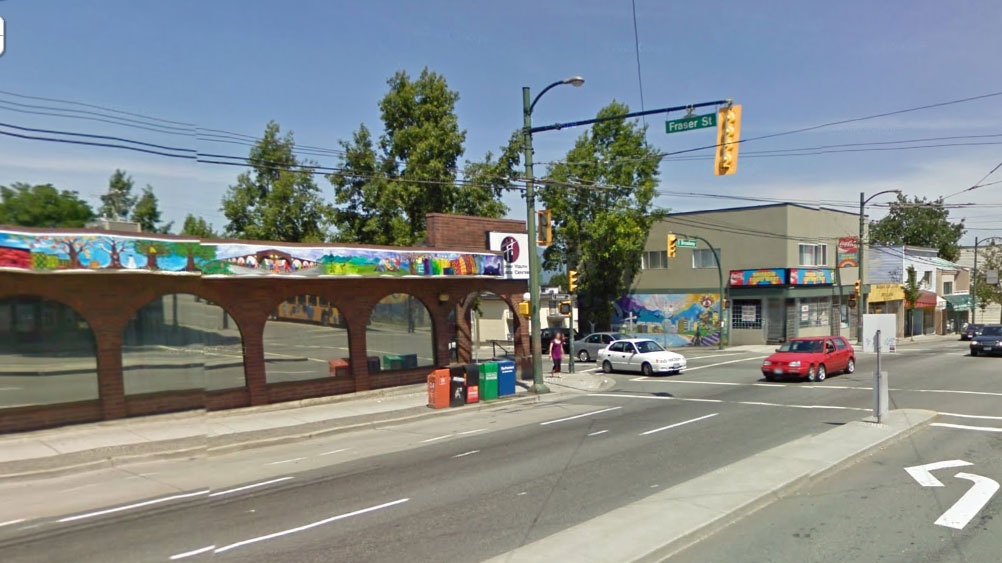 The East Broadway area where a multi-storey social housing development is planned is shown in this undated photo. (Google Maps)

Residents of Vancouver's Mount Pleasant area are fighting the city's plans to build a multi-storey building providing housing and services for at-risk youth and adults in their neighbourhood.

Vancouver city council is expected to vote on rezoning at 675-691 East Broadway to make way for a new development after a public hearing tonight.

The proposed tower would be home to 103 single-residency social housing units -- including 30 for troubled youth -- and an expanded Broadway Youth Resource Centre.

The plan from the Vancouver Native Housing Society calls for an 11-storey building, which would also contain 24 market rental apartments and retail space on the ground floor.

The Mount Pleasant Neighbours group has fought against the proposed plan, arguing that there are several problems with the proposed tower, beginning with its height.

"It's right at the top of a hill, so that just emphasizes the height," Megan Reiter, a local resident, told ctvbc.ca.

"It's just not consistent with the neighbourhood."

She said that neighbours are also concerned about the growing concentration of poverty in East Vancouver, as well as the number of social housing units in the building.

"We think that having over 100 people with addiction histories and mental health issues is really just asking for trouble," Reiter said.

"We would really like to see a mix of income levels."

An online petition from the group has gathered 430 signatures. It ask the city to reduce the size of the building and the number of social housing sites it will contain.

At tonight's meeting, city staff will recommend reducing the height of the project to eight stories, but Reiter said that isn't a solution to local residents' concerns.

"They want to do that by eliminating the market rental housing component, and to us that doesn't really fix the problem. They're reducing the height, but at the expense of the income mix."

But those behind the proposed project say that they'll argue to keep the building at 11 storeys.

"We don't feel that it is too tall. We think that, particularly in this day and age, you have to take advantage of what's available to you," said David Eddy, executive director of the Vancouver Native Housing Society.

"We don't have the luxury of finding several pieces of land for something that can be done on one piece of land."

He said that the 73 units set aside for adults will help people in the neighbourhood who are struggling to make rent payments, and added that he is hopeful the new residents will integrate well with the community.

"We have a 98-unit project at 27 West Pender. You've probably never heard of the project and one reason why you've never heard of it is that there's been no problems," Eddy said. "We run a tight ship."

Ian Mass, executive director of Pacific Community Resources, said that besides allowing the Broadway Youth Resource Centre to double in size, the new building will provide crucial housing for 30 youth at risk of becoming homeless or developing substance addictions.

"We're in the middle of a homelessness crisis," Mass said. "If we say we don't want 11 stories at Broadway and Fraser, it's not like the money is going to shift somewhere else. It'll disappear."

He added that he'll be speaking at tonight's meeting in support of keeping the project at 11 stories.