Experts are debating whether a badly decomposed sea lion found on Bowen Island was killed by a great white shark.

Sasha Rankin made the discovery when she was walking her dog on a trail along The Cape on Bowen.

"There was an incredible strong stench, a foul smell," she told CTV News. "I walked up and found a sea lion decapitated, complete serrated at the neck."

She said she’d seen sea lions killed by propellers before and these injuries looked obviously different.

She contacted a California-based shark researcher at the Shark Research Committee and shared a couple of photos.

Ralph S. Collier examined the photographs and said he’d need to see the body in person to know definitively whether a shark was involved, but there were some clues that may have been the case.

"If you look very carefully at the top of the wound, you will see what I refer to tissue bridges," he explained. "Those tissue bridges are one of the identifiable markings left by a white shark when it bites because of the space between the teeth."

But the lead veterinarian at the Vancouver Aquarium believes that may be another reason why the sea lion is missing its head.

"Researchers will often take the head as part of the evidence collection that they’ve assessed a carcass, so that may be going on. I think it would be difficult to say this was a great white," Dr. Martin Haulena said.

He said great white sharks have been reported in B.C. coastal waters before, but those sightings are rare.

He also explained a great white would not waste its prey.

Regardless, he said he would not discount that the sea lion could’ve been killed by shark on Bowen Island. 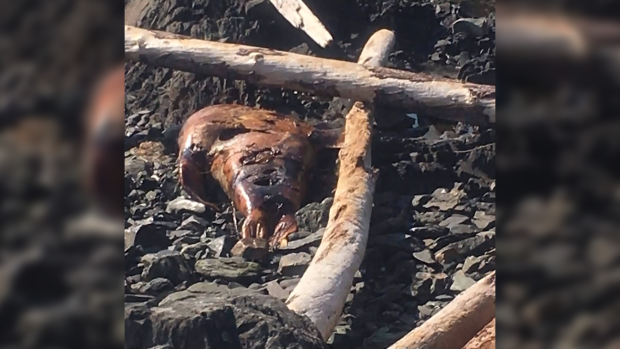