Liam Neeson has a very particular set of skills, including the ability to find free sandwiches.

The "Taken" star stopped in to a New Westminster restaurant earlier this week after seeing a sandwich board sign outside promising: "Liam Neeson eats here for free."

The other side read, "Come in and get 'Taken' away by our sandwiches." 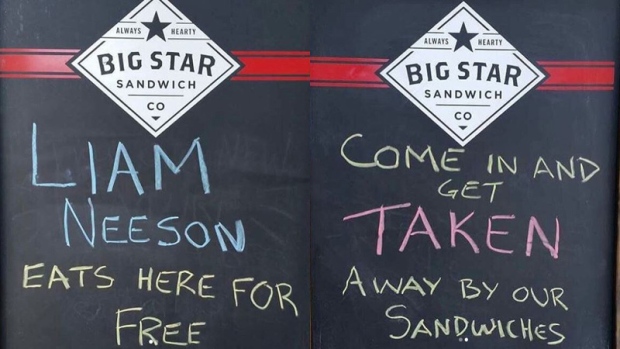 Staff at Big Star Sandwich Co., located on Columbia Street, snapped a photo of the star posing with the sign.

The photo was posted on Instagram with the caption, "Holy f--k, it worked!"

The men who'd been working in the shop at the time said they were shocked when he came in, and that he spent about 10 minutes taking photos and chatting. They said the actor didn't actually take them up on a free sandwich though, saying he was too busy to eat, but that he might be back.

The shop now has a Neeson-themed special: A "hard hitting sandwich seeking sweet revenge." The feature sandwich has lots of beef and a "one-two-punch of bacon and hickory sticks, and spice that'll get revenge on you."

Today's feature is the Neeson! Lot's of beef, a one-two-punch of bacon and hickory sticks, and spice that'll get revenge on you tomorrow! #AlwaysHearty #SandwichLife

Unfortunately, the man who thought up the idea for the eye-catching sign had gone home for the day and missed the visit. He told CTV News he was crushed.

She posted another shot taken in March at an Alberta ski resort with the caption, "Day 1 on top of Fortress Mountain for #HardPowder."

Few details have been provided about the film, which is based on the 2014 Norwegian movie "In Order of Disappearance." Neeson plays a snowplow driver seeking revenge against the drug cartel he thinks killed his son. His actions spark a turf war between a local gangster and an Aboriginal mob boss.

Those behind the film, which takes place in a Colorado ski town, initially hoped to shoot in settings including Banff, the Lake Louise townsite and ski hill, and the Columbia Icefields, but the plan was shot down by Parks Canada.

The man who has been cast as the gang leader, indigenous Canadian actor Tom Jackson, said he was disappointed with the decision. In an interview with CTV Calgary last month, he said he had a lot of input on his role in the film, and that there's nothing wrong with an indigenous character being portrayed as a villain.