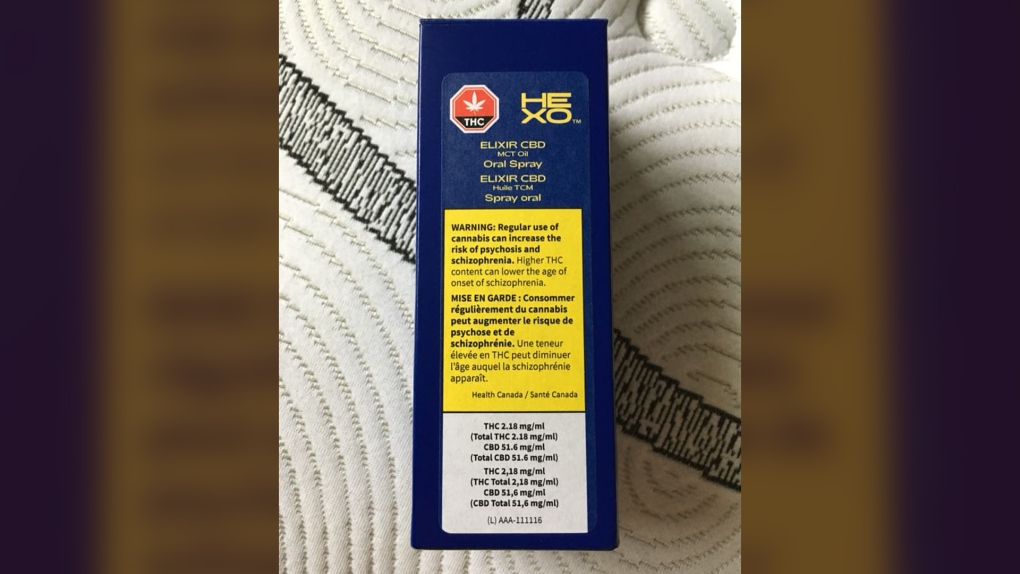 The packaging for CBD oil spray produced by HEXO Operations Inc. is seen in this image provided to CTV News.

A university student in Kamloops, B.C. is suing the province's cannabis distributor over an alleged labelling mistake she claims led her to inadvertently consume more THC—the psychoactive ingredient in marijuana products—than she intended.

According to a statement of claim filed with the B.C. Supreme Court late last month, Kimberly Nicole Webster purchased Elixir CBD oral spray produced by a Quebec-based company called HEXO from BC Cannabis Stores. The document says the spray was labelled as containing 51.6 mg/ml of CBD and a relatively low 2.18 mg/ml of THC.

"She now has reason to believe that the reverse is true, and that the CBD Oral Spray that she purchased contained high levels of THC and low levels of CBD," Webster's lawyer claims in the lawsuit, which also names BC Cannabis Stores, the Ministry of the Attorney General and HEXO.

According to the court documents, Webster received an email from one of the defendants, the BC Liquor Distribution Branch, on Nov. 20 informing her that the product had been mislabelled. That's more than a month after she first purchased the spray, the suit says.

"After further investigation we have determined that the product contains low levels of CBD and high levels of THC," the BCLDB said in the email which was shared with CTV News, adding that the spray was "incorrectly labelled."

In an interview with CTV News on Wednesday, however, HEXO Vice-President Terry Lake said the company is disputing her claim, adding that it's "impossible" for Webster to have received the wrong product.

"There were 132 boxes of the high-CBD product and it was discovered after they had been shipped that there were six bottles that remained behind in the processing area of our facility," Lake said. "We were concerned that a high-THC product had entered that shipment."

He said HEXO contacted the BCLDB "right away" and was able to track down the six boxes that contained the wrong product before the orders were delivered.

"We found those, we replaced them with the proper product and that was before any consumers received any of the mispackaged bottles," he said.

According to Lake, the BCLDB sent the email to customers out of an abundance of caution, but emphasized that no mislabelled product ever reached consumers.

"We are very, very confident that no mispackaged product got into consumers' hands and we work very closely with BCLDB to make sure that we corrected the problem before it reached any consumers," he said.

Webster is seeking damages and costs, but the documents do not set out a dollar amount.

BCLDB told CTV News it would not comment on the case while it is before the courts.