How the B.C. budget tackles the province's housing crisis

Ever since the B.C. NDP formed government last summer, the public has been waiting to see how the party plans to address the province's out-of-control housing market – and now the wait is over.

In her 2018 budget speech Tuesday, Finance Minister Carole James highlighted some of the government's 30-point plan for making buying and renting more affordable for British Columbians. The comprehensive strategy focuses on measures to discourage speculation, decrease demand from foreign buyers, and increase the supply of available housing.

"Housing affordability affects us all," James said. "Nurses, construction workers, teachers, engineers, city workers are building careers, growing families and contributing to our province. They should be able to put down roots."

Here's a rundown of some of the major changes the NDP plans to put in place, which, notably, do not include the $400 renters rebate promised during the 2017 election campaign.

Effective Wednesday, the 15 per cent tax on foreign home buyers is being hiked to 20 per cent, and for the first time the steep levy will be applied outside of Metro Vancouver.

Going forward, the tax will apply to foreign purchasers who buy in the Fraser Valley, Victoria, Nanaimo and Kelowna.

"We think that foreign buyers should contribute more for the quality of life they enjoy when they are in our province," James said. "Extending it to other communities ensures that we don't simply push the speculation to other markets." 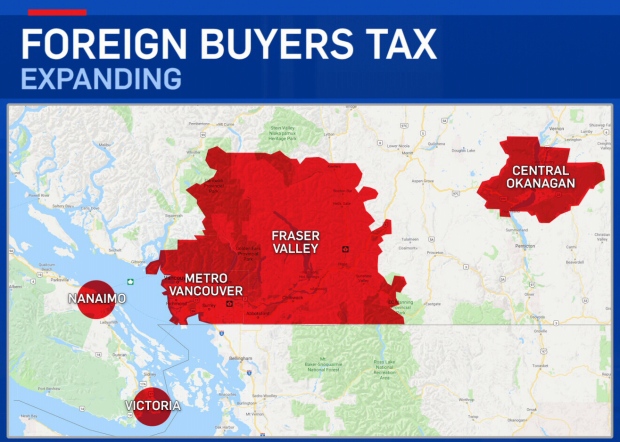 Starting this fall, the government will also be applying a 0.5 per cent speculation tax to residential properties in the province's major urban areas that will target any buyer, foreign or domestic, who doesn't pay taxes in B.C.

Exemptions will be offered on principal homes, some long-term rental properties and other special cases, but James said the goal is to strongly discourage people from parking capital in the province's overheated housing market.

"B.C.'s real estate market should not be used as a stock market, it should be used to provide safe and secure homes for families, for renters, for students [and] for seniors," James said.

Though the tax doesn't come into effect until the second half of 2018, the government expects it will bring $85 million into the coffers this fiscal year.

Perhaps the biggest announcement is the investment of $6.6 billion into homes and housing supports over the next decade, with funding promised to be shared with every corner of the province.

The investment represents the largest housing investment in B.C. history, according to the NDP.

"Families are squeezed, students are struggling, seniors falling through the cracks. We came into government with a vision to fix this, and we're taking action," James said.

"We're going to build the homes that people need. These homes will be a mix of housing for students, people with disabilities, seniors and families, and will range from supported social housing to market rental housing."

The plan would see more than 14,000 rental units added to the province's housing stock, which could provide much-needed relief for renters in cities such as Vancouver, where the vacancy rate has hovered around one per cent for years.

Those units will be in addition to the 1,700 affordable rental homes funded in last year's budget update.

Shining a light on hidden ownership

Another measure is designed to bring an end to hidden ownership – the practice of using numbered companies, offshore trusts and stand-in owners to obscure where the money flowing into B.C. real estate really comes from.

Under the current system, the government has no way to identify the owners of nearly half of Vancouver's most expensive properties, according to the NDP.

"A lack of transparency in our land registry means true ownership is not clear. We're going to change that," James said.

Under the changes, Property Transfer Tax forms will require additional information about "beneficial ownership," and a new registry on beneficial land owners under the Land Title Survey Authority will be made publicly available.

The NDP said the registry will help police, as well as federal and provincial tax authorities, conduct investigations into money launderers and tax frauds.

Beefing up the province's auditing and enforcement abilities

New rules and regulations can't accomplish much without enforcement, and the B.C. government has proposed strengthening its own powers to crack down on people abusing the system.

The province is increasing the time-limit for assessments to six years, letting auditors collect more information on buyers, and introducing new penalties for non-compliance.

Though James describes the government's measures as "bold," she acknowledged they will not provide a quick fix for the troubles that have long been festering in B.C.'s real estate market.

But she said they are a start.

"People have clearly been hurt by the housing crisis," James said.

"The problem has been ignored for too long, and the consequences are being felt through British Columbia."

For the full list of B.C.'s 30-point plan to address housing affordability, including a hike to the luxury homes tax and increased assistance payments for low-income working families, visit the province's Budget 2018 website.