How Santa's still visiting children, despite the pandemic

He’s still coming to town, but things look a little different this year.

With so many shopping mall visits with Santa cancelled, Saint Nick had to come up with a COVID-friendly way to see kids.

“If children can’t come to the mall, then Santa can come to the children,” Santa said in an interview with CTV News.

So Santa has been making a lot more house calls, all of them outdoors.

“On their porches or their front yards. In front of garages. Whatever works for them,” says Santa’s head elf, Tara MacDonell of Fraser Valley Santa.

Santa has also added a clear mask to his wardrobe and uses hand sanitizer.

There are no hugs with Santa and no sitting on his lap.

“So we do an air five. And that’s it,” he explains. “I try and get them close enough that I can hear them but far enough away that it presents no problem.”

“It has been insane,” says MacDonell. “I’ve been fielding probably 40 to 50 emails and messages a day so far.”

She says the pictures with Santa are such a cherished part of family traditions that they want to find a way to make it work and still follow pandemic rules.

During a recent porch visit, four excited siblings talked with Santa about what they want for Christmas and giggled at his jokes. 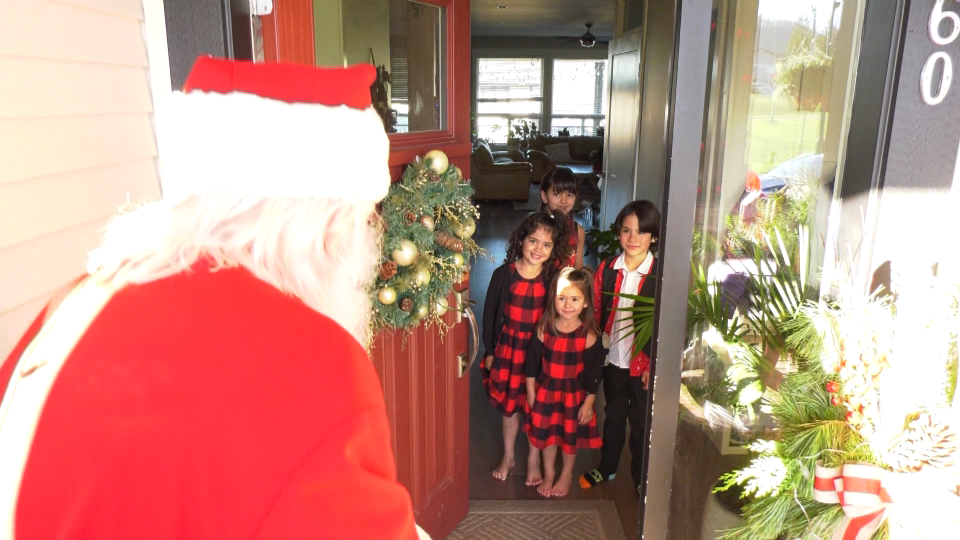 Did the kids noticed anything different about him?

And how did the kids feel about a mask-wearing Santa?

The kids said when they heard a knock at the door, at first, they thought it was the mailman.

They were thrilled when it turned out to be Santa instead.

Even though the pandemic might feel like a Grinch trying to steal Christmas, Santa seems to have found a way to make it merry and safe.

And his message to children everywhere?