Seniors Advocate Isobel Mackenzie is photographed at her office in Victoria, B.C., on Friday, December 15, 2017. (The Canadian Press / Chad Hipolito)

The majority of seniors requiring home support find the services they need are unaffordable, says a new report from B.C.'s seniors advocate.

According to the report released Wednesday, even though most seniors prefer to live at home for as long as possible, it's actually cheaper for many to move into a long-term care program, rather than paying for daily, at home care for a couple hours per day.

"Home, for many seniors, is a collection of memories that is a totality of their life and they want to stay there," said Isobel Mackenzie, B.C. seniors advocate.

"We are charging seniors too much for their provincial home support program."

The report explains that a single senior with an income of $27,800 is expected to pay $8,800 a year for a once-daily home support visit. It goes on to say that, compared to the total cost of living while accessing home support services, that same senior could save $9,780 per year by moving into a full-time care home instead. 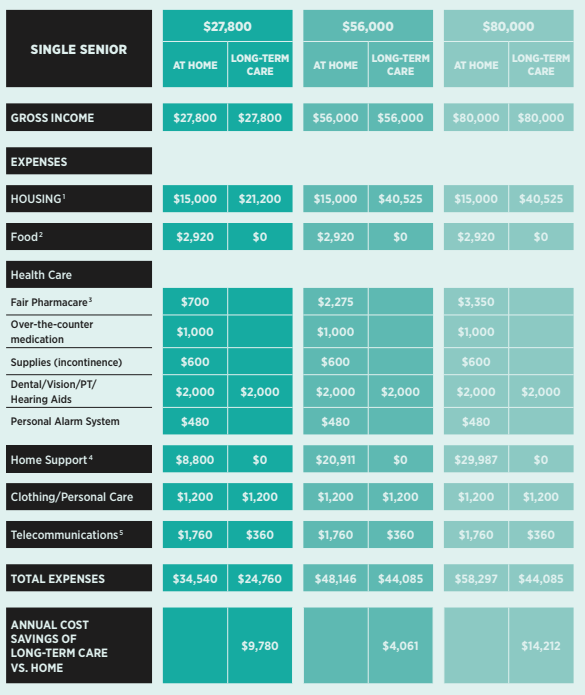 However, for taxpayers, it costs more for seniors to go into a care home, Mackenzie said.

Mackenzie added that, with home support clients receiving less than one hour of support per day on average, it's typically family caregivers who are filling the gaps in care.

"My office has issued two reports on caregiver distress and the government has responded in part by increasing adult day programs and facility respite beds, but home support needs an extra boost as well, perhaps the biggest boost," she said, adding that 31 per cent of caregivers are in distress.

"What we see here is a system that is woefully, woefully underservicing clients and distressed family caregivers and we see that theme consistently throughout all of the data."

In the new report, Mackenzie offered seven recommendations, including designing a standardized care plan throughout the province.

"It will improve standardization and continuity and will allow clients and their families to know what services they can get," she said.

"Not only is there not a standardized plan in the province, even within health authorities there are different versions of care plans…and it can result in several things including confusion to the community health worker."

Moving ahead, Mackenzie said she will be working with the health ministry to make a plan to address the report's concerns.

"As challenging as it will be, we must find the resources to get more home support to more seniors," she said.

"I truly believe the reason we have such serious shortcomings in the current home support program is not because we don't care, it's because we didn't know. We didn't know the magnitude and the systemic nature of the problem until we did this review."