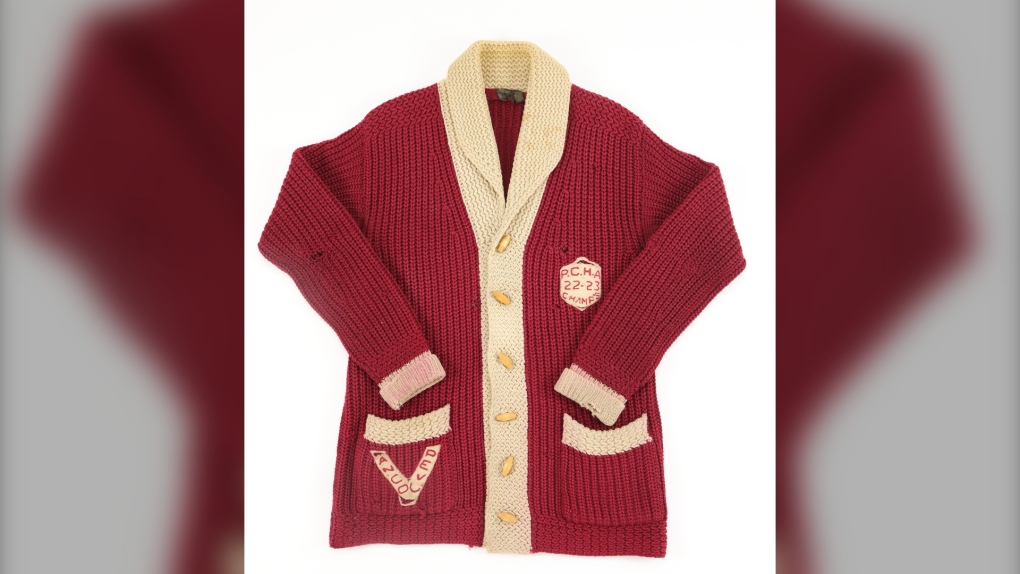 A piece of hockey history is up for sale, with a rare Vancouver Millionaires sweater, seen in an undated handout photo, hitting the auction block. The cream and maroon wool cardigan is believed to have belonged to Hall of Fame goalie Hugh Lehman, who backstopped the Millionaires to a Pacific Coast Hockey Association championship in 1922-23. THE CANADIAN PRESS/HO-Lelands Auction, *MANDATORY CREDIT*

VANCOUVER -- A unique piece of hockey history is up for sale, with a rare Vancouver Millionaires sweater hitting the auction block.

The cream and maroon wool cardigan is believed to have belonged to Hall of Fame goalie Hugh Lehman, who backstopped the Millionaires to a Pacific Coast Hockey Association championship in 1922-23.

About 10 to 15 sweaters were made for players and staff to celebrate the achievement, but the one currently up for sale is believed to be the last of its kind, said Mike Heffner, president of Lelands Auction.

"Of those 10 or 15, it's amazing that even one survived," he said. "Because you put clothing dormant in storage for even 10 years, if they're not cared for properly, moths can get at them, they can deteriorate. And having something that is (almost) 100 years old, like this, that survived through so many different stages is incredible."

Not only did the sartorial souvenir survive, it remains in excellent condition, complete with the original wood buttons, the remnants of a tag, and a patch on the left front pocket with the Millionaires' iconic "V" logo.

It was made in a time when even hockey's top stars would squeeze every possible ounce of life out of their equipment, Heffner said.

"Players wore the same jersey for the whole season and sometimes for multiple seasons because teams didn't have the money that teams have now.," he said, noting that if a jersey was ripped during a game, it would simply be sewn up and given back to the player.

"The garments weren't worth anything back then. They were considered just sweaty, old hockey jerseys."

When a piece like the Millionaires sweater finally outlived its usefulness, it wasn't carefully packed away to be preserved for posterity, either.

"All it was considered was a shirt or a jacket or the time, and once it wore out, things were discarded," Heffner said. "They were thrown in the trash. And they were worn until they couldn't be worn any longer, just like hockey jerseys."

The sweater currently up for sale was previously displayed at the Original Hockey Hall of Fame in Kingston, Ont., and while Heffner said he can't prove its ownership, the story that's been passed down is that it belonged to Lehman.

Born in Pembroke, Ont., in 1885, Lehman played 22 seasons of professional hockey and won the Stanley Cup with the Millionaires in 1915.

He spent two years in the NHL, too, joining the Chicago Blackhawks at age 41. Lehman set a record in November 1926 as the oldest goalie to win his debut when Chicago beat the Toronto St. Patricks.

That record stood until February of this year, when 42-year-old Zamboni driver David Ayres caught international attention for coming in as an emergency backup for Carolina and helping the Hurricanes beat the Toronto Maple Leafs 6-3.

Lehman was known for being one of the first goalies to regularly leave his net, and he was nicknamed "Old Eagle Eyes" because he was so good at tracking loose pucks.

Heffner expects the unique Millionaires sweater will end up in a private collection, but said its next owner may also donate or lend it out to a museum where it could be appreciated by the public.

As of Thursday, the top bid for the piece of hockey history was US$3,137. Heffner believes it could fetch as much as $10,000 before the auction closes on Dec. 11.

This report by The Canadian Press was first published Nov. 26, 2020.