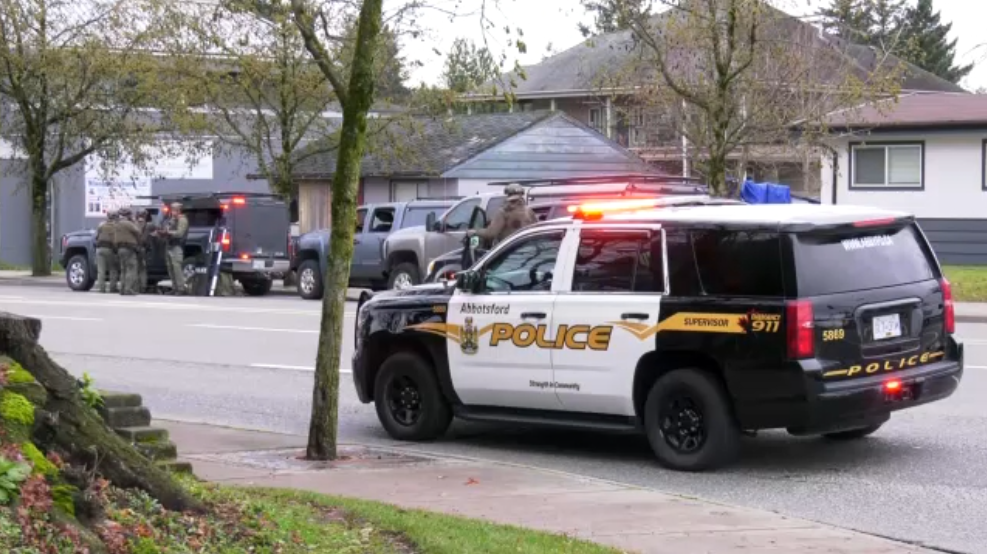 A large area of Abbotsford was behind police lines Thursday afternoon, as heavily armed officers surrounded a home on Clearbrook Road. (CTV)

A large area of Abbotsford was behind police lines Thursday afternoon, as heavily armed officers surrounded a home on Clearbrook Road.

The response came after police were called around noon for a report of a man covered in blood fleeing from a house.

“Upon police arrival, patrol officers located the victim in this instance, who was subsequently taken to hospital by BC Ambulance Service for treatment of non-life-threatening, but very serious injuries,” said Sgt. Judy Bird of the Abbotsford Police Department.

An armoured vehicle was brought in, as well as a police dog. At one point, it appeared a smoke bomb of some sort was set off.

Throughout the afternoon, officers on a loud speaker could be heard asking for the person or people inside to come out. In the evening, an officer threw what appeared to be a cell phone through a broken window and then could be heard saying that police would be calling it.

“We have crisis negotiators on scene, major crime detectives and our emergency response team as well as patrol officers as we continue our investigation,” Bird said.