When the Vancouver Grizzlies joined the NBA in 1995, basketball fans across B.C. celebrated. But the fanfare was shortlived; over six dismal seasons, the Grizzlies lost a whopping 359 of 460 games, making them the worst team in the league.

At the centre of it all — no pun intended — was player Bryant Reeves, who many simply knew by his nickname: Big Country. When the team relocated to Memphis, Tennessee in 2001, Reeves — at a reported 300 pounds — played two pre-season games before taking earnings from his US$61.8-million contract and vanishing from the public eye.

If you were wondering what happened to the controversial star, so was filmmaker and self-proclaimed Grizzlies super fan, Kat Jayme. In her documentary, “Finding Big Country,” Jayme embarks on a mission to track down the former NBA player, where, 17 years later, he has taken up residence on a farm in his hometown of Gans, Oklahoma (population: 312).

“In 1995, when I was seven years old, Vancouver got an NBA team…and I was obsessed with them,” Jayme explains in the trailer.

Seven-foot-tall Reeves quickly became her childhood hero, and, as the Grizzlies’ first draft pick, the team’s buzziest and most promising player. The honeymoon didn’t last long, however, as a combination of back injuries and extra pounds began to slow Reeves down — eventually turning him into a public scapegoat for the Grizzlies’ lack of success. If that doesn’t sound bad enough, Canadian basketball legend Howard Kelsey reminds us, “[The Grizzlies] are known as the worst professional sports team franchise in history.”

“Even though many reporters have tried, no one has seen or heard from [Reeves] since the Grizzlies left town,” Jayme narrates. Until now.

The 44-minute documentary takes a nostalgic walk down memory lane, examining Vancouver’s complicated relationship with the troubled team — and Reeves, who, prior, had never publicly spoken about his time as a Grizzly. In the film, Jayme interviews former players and Grizzlies staffers who share that they have fallen out of touch with the reclusive star. Rumour has it that the best way to contact Reeves is to call a local corner store in Gans, and leave a message in the hopes it will get passed on.

“I contacted everyone in his life, and eventually, word got to him that there’s a girl from Vancouver who’s a childhood fan and wants to tell your story. With his friend’s help, they convinced him to [participate in my film],” Jayme explained in an interview with CTV Morning Live. “My goal here was to change the narrative, and tell the real story of Bryant Reeves…so often all we hear is that he became the scapegoat. I’m here to set the record straight.” 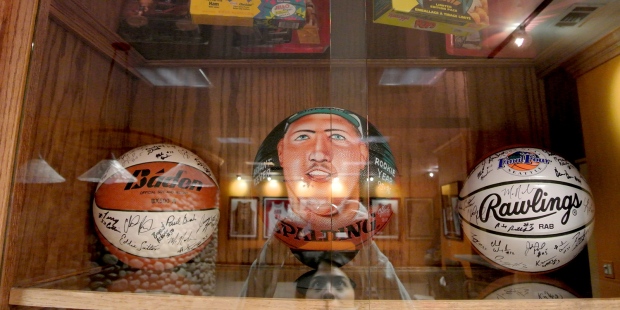 Without giving too much away, Jayme did connect with her childhood idol – and can share that he’s a happy dad of four who is “loving life…and definitely misses and loves Vancouver.”

As for the NBA’s future in our city, there are currently no official plans to bring a team back, but Jayme is hopeful that will change. “It’s for the younger generation I would love to see a team – The Grizzlies were a huge part of my childhood…I miss the magic of going to games as a kid and I want that for this younger generation of athletes.”

Due to popular demand, additional screenings of “Finding Big Country” have been added to the Vancouver International Film Festival schedule, which is on now until Oct. 12.