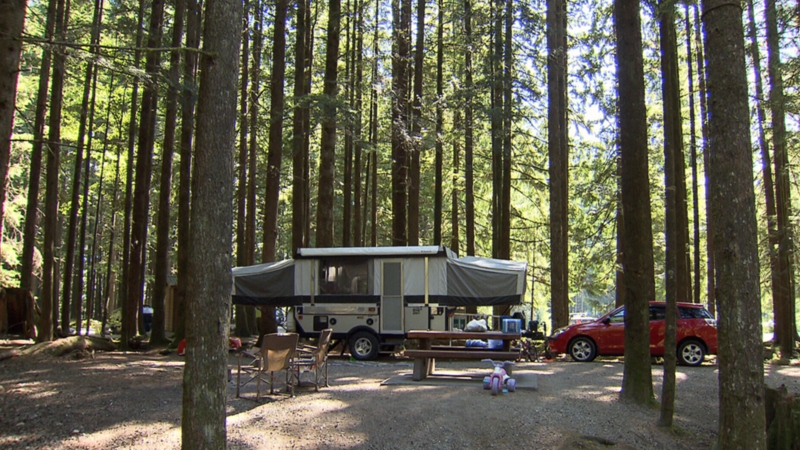 The majority of the new sites will be in the Lower Mainland, Vancouver, Okanagan and Kootenay regions.

Nearly 600 new campsites are being added to parks and recreation sites across the province, just before the summer camping season begins in earnest.

"With over one million campers from B.C., Alberta and Washington expected to camp or RV throughout British Columbia in 2019, this will help ease some of the pressure of locating places to stay in high demand locations," said Joss Penny, the chair of the Camping and RVing BC coalition, in a statement.

The 594 campsites are spread out across the province, however most can be found in regions with the highest demand: the Lower Mainland, Thompson-Okanagan, Kootenay Rockies and Mount Robson.

"People from all over the world come to our province to experience the spectacular natural beauty and enjoy a range of camping opportunities," said George Heyman, the province’s Minister of Environment and Climate Change Strategy.

In a news release, the province confirmed 13 provincial parks will gain 362 new sites, while 12 recreation sites will gain 232 new campsites. Recreation sites are on Crown land, outside of provincial parks, and are generally only accessible by gravel forestry roads.  Potable water and electricity are not provided on those sites, according to B.C.’s ministry of environment, and are meant for campers looking for a more “rustic experience.”

"Camping is more popular than ever, which is why our government continues to increase the number of campsites and enhance visitor experience," added Heyman.

The province has added 1,025 new campsites over the past two years, and said there would not be an increase to camping fees in provincial parks.

Visitors to Fintry Park, Martha Creek Park, Robson River and Monck Park will also have access to upgraded or new facilities, according to the province.

"We want to make sure people of all abilities are able to enjoy nature and all our beautiful province has to offer,” said Lisa Beare, the provincial tourism minister.

According to the government, B.C.’s 1,033 provincial parks see more than 21 million visits every year.