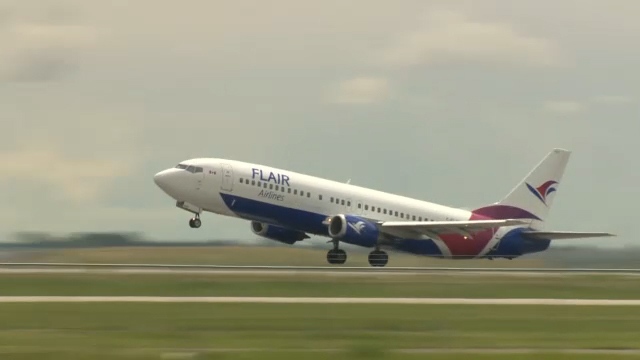 Flair Airlines Ltd. is pulling out of the airport in Abbotsford, B.C., due to a lack of passengers and intense competition from rival budget carrier Swoop.

VANCOUVER -- Flair Airlines Ltd. is pulling out of the airport in Abbotsford, B.C., due to a lack of passengers and intense competition from rival budget carrier Swoop.

Flair CEO Jim Scott cites an intense focus on the Abbotsford-Edmonton route by its competitor, a subsidiary of WestJet Airlines Ltd., that has resulted in a glut of cheap tickets.

“We just can't compete with $3 airfares in the market - and not just a few of them, but tens of thousands of tickets,” Scott said.

“Either we're going to be confined to very few routes or the government's got to step in and show that anti-dumping and predatory pricing has meaning in Canada,” he said in a phone interview.

Flair said no passengers will face cancellations as a result of the Abbotsford pullout, which will also end flights between the Lower Mainland city and Kelowna, B.C., Calgary, Winnipeg and Toronto.

Swoop unveiled a so-called loonie sale last month, offering up to 100,000 seats for a base fare of $1 before taxes and fees. The sale disproportionately targets Edmonton-to-Abbotsford, which Swoop points out is its highest-frequency route.

“Swoop welcomes all airlines in the Canadian market that are providing more choice and accessibility for travellers. We have seen increased traveller demand for Edmonton-Abbotsford routes, making it one of our most popular,” the Calgary-based company said in an email.

“Swoop's goal is to continue to fill an important gap in the Canadian airline industry, making air travel simple, affordable and accessible to all travellers.”

More than one-quarter of the seats under Swoop's loonie deal are on the Edmonton-Abbotsford route.

In 2018, the Competition Bureau launched an ongoing predatory pricing investigation into Swoop and WestJet over allegations the two carriers used anti-competitive practices to crowd out Flair from at least three routes.

Predatory pricing occurs when a company offers services below “avoidable costs” to hobble a competitor, along with an expectation to recoup losses through future price hikes, according to Competition Bureau guidelines.

“It's a matter of persuading the bureau that there's enough of a problem that they should take action,” said competition lawyer Richard Elliott, who used to work on airline cases at the Competition Bureau.

“Predatory pricing cases are fairly difficult to prove,” he said, highlighting slippery definitions around avoidable costs, time frames and “abuse of dominance” under the Competition Act.

A lawsuit combating anti-competitive practices by a dominant firm - abuse of dominance - often has to show that prices have gone up - not down - to prove that competition is “substantially” reduced.

“You're going after somebody for having low prices in the market, which kind of flips things on its head,” Elliott said. “In the near term, that looks like something that consumers would like...but the longer-term effects may be detrimental if there's less competition.”