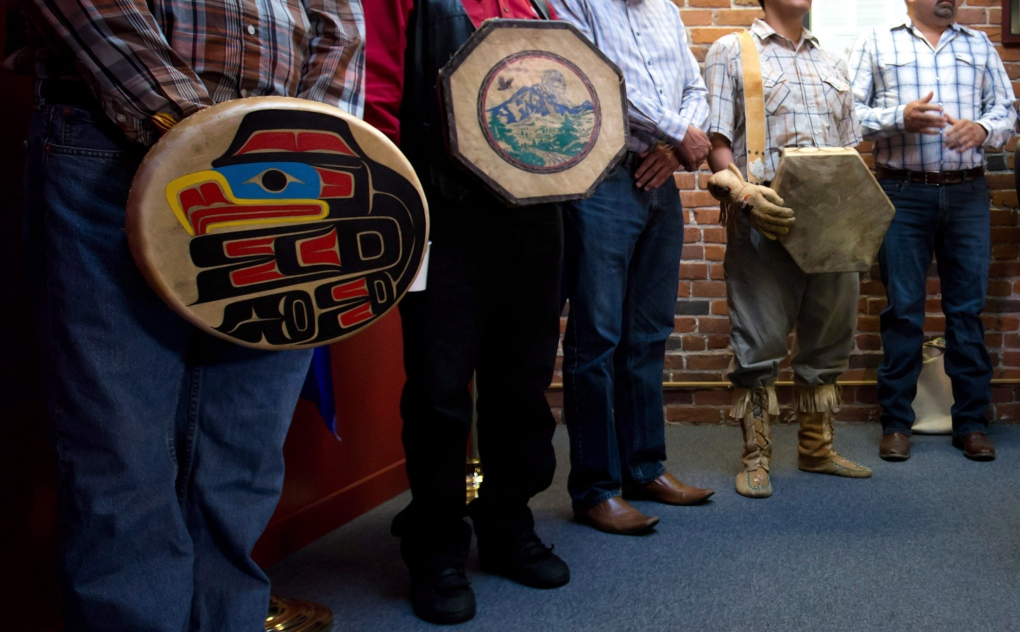 First Nations chiefs hold drums while listening during a news conference in Vancouver on June 26, 2014, after the Supreme Court of Canada ruled in favour of the Tsilhqot'in First Nation, granting it land title to 438,000-hectares of land. (Darryl Dyck/THE CANADIAN PRESS)

VANCOUVER - A First Nations community in B.C. says its members intend to peacefully take action to protect two lakes with cultural and spiritual significance from drilling by a mining company.

According to a release from the Tsilhqot'in Nation in Williams Lake, Taseko Mines sent a notice on June 27 indicating it would begin using heavy equipment such as logging and road-clearing equipment starting on Tuesday, July 2.

A spokesperson for the First Nation says the action is planned for Tuesday morning, when the company's work is set to begin.

A decision by B.C.'s Supreme Court last August allowed Taseko to proceed with investigative work around the site of the company's so-called New Prosperity Project, and the court refused to hear the First Nation's appeal of that decision last month.

The company says the drilling is an attempt to prove the lake will not be harmed by the proposed open-pit gold and copper mine west of Williams Lake that was approved by B.C. in 2010, but rejected twice by the federal government on the grounds of adverse environmental effects.

Tsilhqot'in Nation leaders say Taseko Mines does not have the nation's consent to undertake the investigative work and that B.C.'s approval of the drilling is a rejection of the United Nations Declaration on the Rights of Indigenous Peoples.