Endangered birds protected by a force to be reckoned with

That’s how the Vancouver Police Department describes the work its members do every day, 365 days a year. They don’t just respond, they often go above and beyond their job description, and that includes members of its mounted unit.

Officers and their equine partners regularily patrol beaches, streets and parks in Vancouver, and are invaluable community outreach for the department. Tourists and locals flock to the unit’s horse/human teams, posing for photos and perhaps getting to stroke a soft nose, or give a pat on the neck (horse, not human).

The mounted unit is also deployed for crowd control, including dangerous and unpredictable situations like the 2010 Stanley Cup riots. They are a formidable presence with their heft and steadiness, helping to disperse crowds and clear a path for the boots on the ground. Just like any other member of the VPD, the mounted unit teams enforce the law and protect the public.

But the trusty steeds, and their humans, also play a key role in protecting an endangered species of bird that conservationists say is in trouble.

Every April, like clockwork, a colony of barn swallows returns to their nests built in the rafters of the Vancouver Police Mounted Unit barns in Stanley Park. High above the horses heads, the little birds swoop and dart, chattering wildly while snatching insects mid-air. It’s a species that has evolved to nest almost exclusively in man-made structures, like barns and bridges.

"This is actually one of the biggest colonies in B.C. so we really want it to do well,” said Meghan Cooling of the Stanley Park Ecology Society, which has been monitoring the birds since 2014, ensuring they are given a chance to come back from a massive population decline.

For six months, the society observes, counts, and documents the nests in the mounted unit’s barns. The swallows migrate to Central and South America in September, only to return every year mid-April to the nests they’ve built and where they incubate their eggs and raise their young. But the society can’t be there all the time, so that’s where the keen observation skills of the police officers come in very handy. 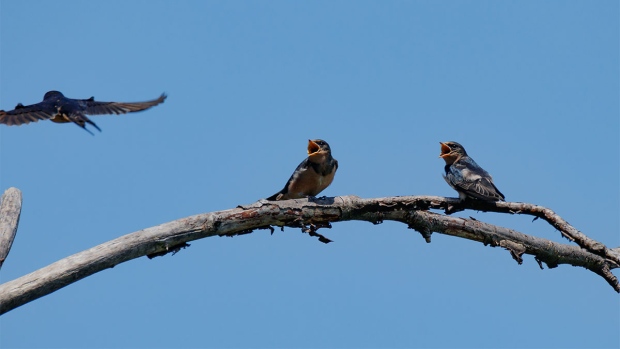 "They were the ones that let us know when they first came back in the spring,” said Cooling. “And they let us know when fledglings or hatchlings fall from the nest as well.” Information key to the efforts to save them.

And the flitting, chirping, agile flyers are a welcome sight for officers as they work in the barns.

“It’s a little bit of a slice of the circle of life in that we get to see the little babies grow and peek their little heads out over the nest,” said Const. Joanne Hardman. “And then they’re trying to fly, and off they go and we don’t see them again until next year.”

In 2018, the Stanley Park Ecology Society surveyed most of Stanley Park but did not locate any other barn swallow nests within the park, except for the Vancouver Park Board’s equipment shed. They counted 80 nests, half of which were active, and noted 131 hatchlings/fledglings, up from 80 the previous year. 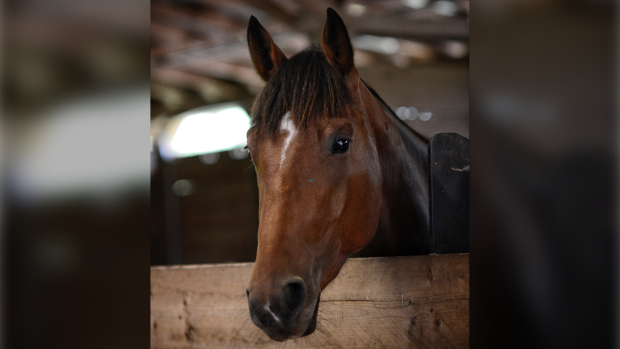 The 20-gram insectivores are currently listed as “Threatened” by the Committee On the Status of Endangered Species In Canada (COSEWIC), and are blue listed, or of “special concern” in B.C. Conservationists believe the dwindling numbers — falling 70 per cent over the last two decades — are the result of fewer wetland hunting grounds, fewer nesting sites, and deliberate human interference. Some people just won’t tolerate the prolific poopers and their non-stop chatter, and choose to destroy their nests, a practice Cooling notes is illegal under the Migratory Species Act.

Which may explain why the colony at the police barns in Stanley Park is so successful. Perhaps the birds somehow know that their home there is truly a safe haven.

“We do our level best to make sure they are secure year after year,” said Const. Harding. "They seem to thrive here.”

Cooling agrees. The nests are easily disturbed and the eggs and babies are at risk from predators, so behind police lines is clearly the place to be. And there is no risk of human interference. The nests are here to stay. Even Porkchop, the unit’s barn cat and resident rodent patrol, leaves the birds alone. 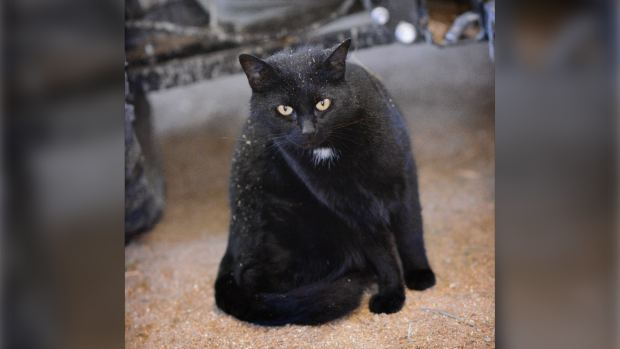 "It’s actually really fantastic to know that they are so well protected here,” Coolng said.

And the human/bird/horse living arrangement is not only good for the swallows; the birds provide an enormous benefit to their roommates.

“They get rid of almost all the flies,” Hardman said. “So compared to the average horse barn we have way less flies here that you get anywhere else.” And that includes horse flies, the biting arch-enemy of horses and humans alike.

“They actually feed their young over 400 meals a day and each meal is made up of multiple insects,” Cooling said. "So they’re free pest control."

The horses return the favour by donating the long strands of hair they shed, which can be seen hanging down from the nests wafting gently in the air. The birds swipe them to use as lining in their mud and grass abodes.

"It’s a really happy relationship between horses, people and birds here,” Hardman said. And while the trademark barn swallow poop-fest can be seen everywhere, it’s a tradeoff they're willing to make to be part of this critical eco-system.

“Just to watch them fly is a joy in and of itself.”

For more information on the efforts to save the barn swallow, visit the Stanley Park Ecology website.