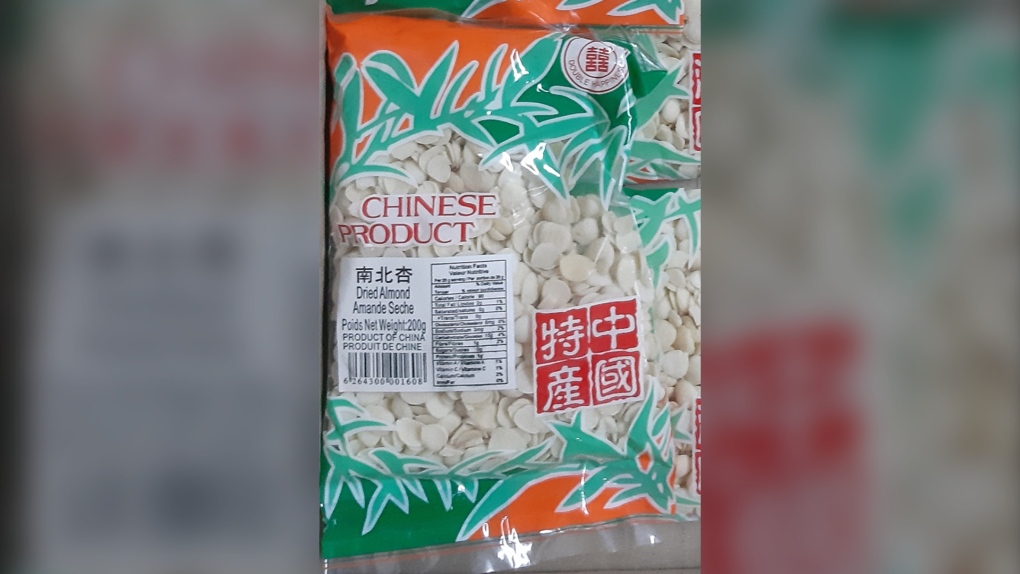 A Double Happiness brand product, labelled as dried almonds are being recalled from stores because they contain toxins (Supplied/Canadian Food Inspection Agency).

VANCOUVER -- A product sold as “dried almond” is being recalled by food inspectors because it may cause cyanide poisoning.

The Canadian Food Inspection Agency has recalled the supposed dried almonds by Double Happiness brand, which were sold in Alberta, British Columbia, Manitoba, and possibly other provinces.

The almonds, which were sold in 200 gram packages in stores, are from a Canadian company called Tun Hau Enterprises Ltd.

This specific recall affects one brand of almonds, and is not a general recall of all dried almond products.

Double Happiness brand dried almonds are being recalled from stores “due to natural toxin amygdalin,” reads a news statement from CFIA.

“Consumers should not consume the recalled product described below as it contains excessive amygdalin which may cause acute cyanide poisoning,” it continues.

This recall comes after an investigation and recall of several types of dried apricot kernels, which may look and taste similar to almonds.

“Apricot kernels naturally contain amygdalin, which can release cyanide after being eaten,” it reads.

“The human body can eliminate small amounts of cyanide, but larger amounts can result in cyanide poisoning, which could lead to death.”

Amygdalin is sometimes referred to as vitamin B17, though Health Canada does not recognize this vitamin under the federal Food and Drug Regulations.

Symptoms of cyanide poisoning can include weakness and confusion, anxiety, restlessness, headache, nausea, difficulty breathing and shortness of breath, loss of consciousness, seizures and cardiac arrest.