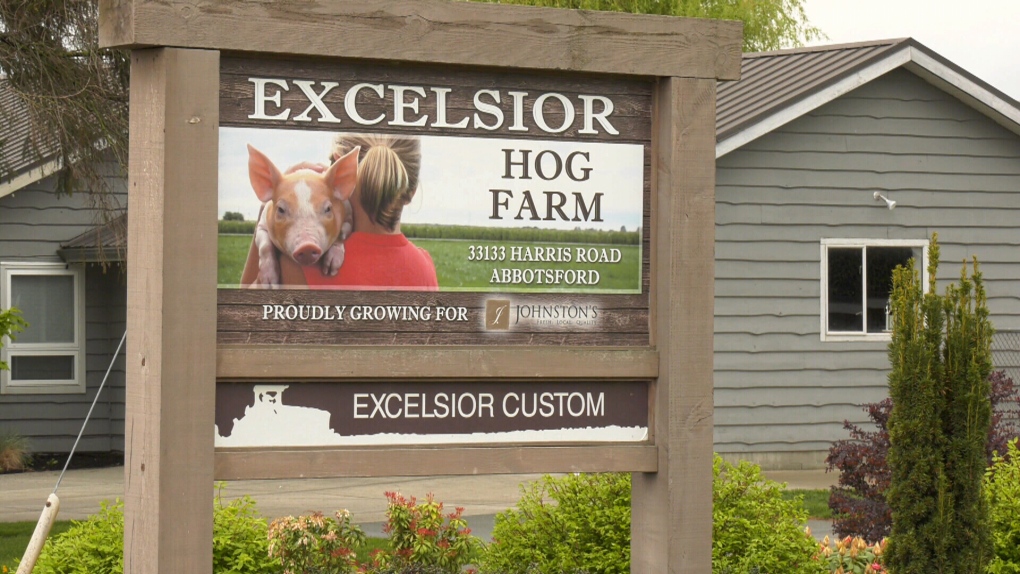 Excelsior Hog Farm is seen in this image from April 2019.

One person was taken into custody during a demonstration at an Abbotsford pig farm on Sunday, police say.

Sgt. Judy Bird told CTV News the next day that a female was taken into custody, and that the Abbotsford Police Department will be recommending charges.

The woman has since been released, but could be charged with break and enter and mischief, Bird said.

Police continue to investigate other protesters that were at the site, but so far, the woman is the only one facing charges. Police have not provided any information on her identity, including her age.

There were about 50 people on the property on Sunday, either right outside the barns or inside. They were identified and released, Bird said.

The demonstration came days after CTV News released video captured by the People for the Ethical Treatment of Animals (PETA) that it says was filmed at the farm.

More information on the video, as well as clips from the video, is available in Tuesday's coverage. Warning: This content is graphic.

The clip posted last week appears to show dead piglets left among living animals, as well as fully-grown pigs with growths and lacerations.

Activists say the video was captured at the farm in February and March, then provided to PETA anonymously this month. CTV News has reached out to the farm, but so far, no one at the property has been willing to speak.

According to the Canadian Code of Practice for the Care and Handling of Pigs, conditions must be clean and "housing for pigs needs to provide for their comfort at all times."

Pig production facilities must have the ability to segregate sick or injured animals, and all animals need to be assessed for problems on an ongoing, daily basis.

Last week, a director with the BC Pork Producers Association viewed the video, and told CTV he thinks it's important that the public realizes what's shown in the video isn't normal on most farms.

Chad Goertzen said the association was sending a vet to check on the condition of the pigs on the property.

He also questioned whether some of the pigs in the footage have already been put in separate pens for treatment, and raised concerns about how the footage was collected.

"To break into a barn and trespass and take footage and not know if it’s been staged or not is awkward," Goertzen said.

He said the association believes the video was captured at the same far, but couldn't confirm it. He added the farm's owner is also a director at the association.