CTV investigation: I posed as a woman willing to exchange sex for rent

Most days, when I get to the office, I sit down at a desk and write about the latest news in Metro Vancouver. But for the past few weeks, work consisted of putting on a lot of makeup and meeting men for coffee dates.

My pseudonym was April Lim. I posed as a young woman looking for a place to stay in Vancouver’s hot housing market. The men I met up with were offering just that – but at a price.

In simple terms, it’s prostitution. These men are asking women to have sex with them in exchange for rent.

Ads have been popping up on Craigslist, some with careful wording suggesting that a discreet deal could be made if you’re the right candidate. Others were more blatant, asking for “friends with benefits” or a “sexy slut.” It seems the men behind these ads have found a new way to get Vancouver’s expensive housing market to work for them.

The first man we met with was from Croatia. He’s waiting for his permanent residency in Canada, and lives in a basement suite in Burnaby. He explained that he hadn’t been successful in relationships and that he was looking to try something new.

He treated the rendez-vous almost like a first date, asking about my background, my family and what my hobbies were. He seemed nervous, and said his mother was waiting for him in the Metrotown mall. I almost felt sorry for the guy – until I realized I shouldn’t.

The reality of the situation remains: this man was setting himself up in a power position to prey on women. When the exchange of goods stops, he’ll want money – or kick the woman out onto the street. I met with Janine Benedet, a law professor at the University of British Columbia, who explained it very clearly.

“It’s not all men who are overtly violent or discriminatory,” she said.

“But it doesn’t mean even the confused ones, even the ones who want to set themselves as unlucky in love aren’t engaging in behaviour that’s exploitative and predatory.”

That man quickly became explicit and very specific about his sexual needs the next time I was in contact with him over the phone, and suggested that I wear clothing that would be easy to take off on certain scheduled nights. He then asked for rough sex on the couch. I felt even less sorry for him then. 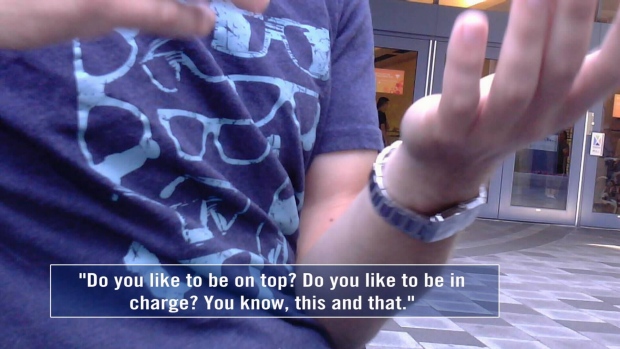 The second man we met up with owns a place on Burrard Street in downtown Vancouver. He’s from Turkey and works in a restaurant. His ad described the situation as a “room share,” but in the e-mail response he revealed it was actually a “bed-share.” He claimed more than a thousand women emailed him in hopes of staying at his condo. When I asked why he decided to meet up with me, he said it was because I stated in my email that I was “open-minded.”

“I ask if you’re open minded, none of them says I am open minded,” he said, describing the other candidates. “And then [I say] is it possible to share a bed? They say: if I put a small blanket down [on the floor] I can sleep there. So they’re not open minded.”

He explained that he didn’t want women paying rent because then they would ask for privacy – and then told me about a previous tenant, whom he had kicked out for that exact reason. She was paying $350 monthly and he decided to ask her to leave in the middle of the month. He wasn’t clear about the entire situation, but told me that she had asked him to be quiet in the mornings. When she threatened to call police for kicking her out, he dared her to do so. She didn’t.

Louisa Russel from Vancouver Rape Relief says women face these kinds of situations too often in Vancouver’s expensive housing market, where vacancy rates are at a record low and competition is fierce. It’s left them desperate, and with not many options.

“We receive calls from women phoning us complaining about predatory landlords,” she said.

Russel says the sex that’s being exchanged for rent can’t be seen as consensual. She explained that single women in poverty receive $375 per month for shelter from the government – an amount that wouldn’t get them anything in Metro Vancouver.

“It’s under these coerced conditions, these unliveable economic conditions that women are responding to these ads because they’re desperate and they don’t want to be homeless,” Russel said. “That’s why they’re responding.” 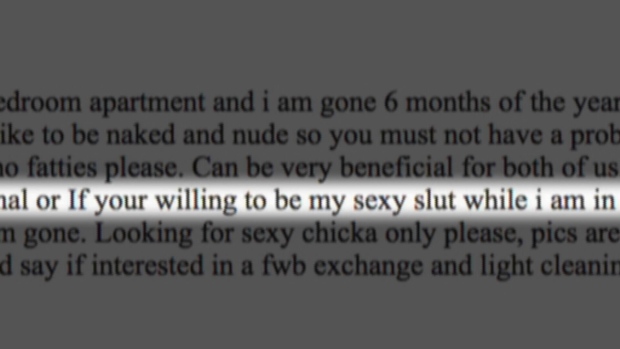 So why do these women need to stay in Metro Vancouver? Iglika Ivanova from the Canadian Centre for Policy Alternatives says it’s because most of the jobs that have been created in the past year in B.C. are located there. She also says women earn less than men in this province and more of them live in poverty.

“It makes them susceptible to abuse,” Ivanova said. “Especially in Vancouver, the gap is very high.”

The women I spoke to are all looking for systemic change; whether it’s the local police force to start cracking down on the men behind these ads, or our governments to take steps to ease the housing market.

In any case a solution has to be found to help women who are turning to these coercive situations because although I get to forget about these men and go home to my family at the end of the day – many women in B.C. don’t.

Watch CTV News at Six Tuesday for the full investigation from Jon Woodward...