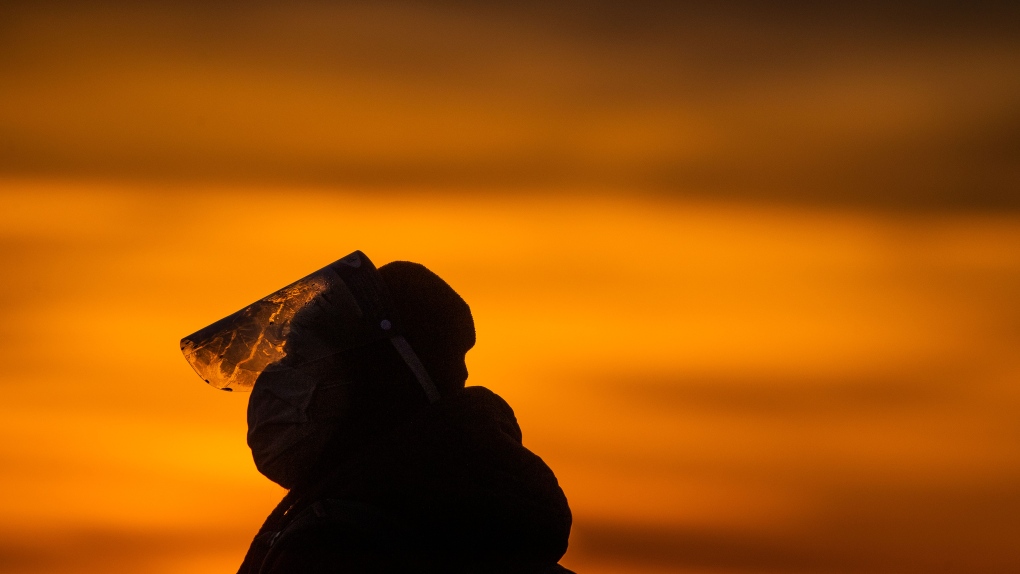 A woman wearing a face mask and face shield to curb the spread of COVID-19 is silhouetted during sunset at Ambleside Beach in West Vancouver, on Sunday, Jan. 9, 2022. THE CANADIAN PRESS/Darryl Dyck

Nine more deaths have been attributed to COVID-19 in B.C. over the last 24 hours, the provincial Ministry of Health said Thursday.

Hospitalizations continue to decline, with the ministry reporting 612 test-positive patients in hospital as of Thursday, a total that includes both those whose illness is serious enough to require hospitalization and those admitted to hospital for other conditions who test positive incidentally.

There are 102 people in intensive care units, according to the ministry.

The total number of people with COVID-19 in B.C. hospitals is the lowest it's been since the province switched last month to a "hospital census" model that does not attempt to exclude incidental cases.

At that time, provincial health officer Dr. Bonnie Henry said a study of hospitalized patients in Vancouver Coastal Health had found about 45 per cent of total COVID-19 hospitalizations fit in the "incidental" category.

Hospitalizations and intensive care admissions have been declining for weeks, as have confirmed cases, though B.C.'s limited testing criteria makes caseloads an unreliable measure of the severity of the pandemic.

The province reported 597 newly confirmed infections on Thursday, though the actual number of people who recently contracted COVID-19 in B.C. is likely much higher.

The number of deaths attributed to the coronavirus has varied substantially from day to day. On Wednesday, the province announced one new death, while Thursday saw nine.

The seven-day rolling average for deaths attributed to COVID-19 in the province is 8.4, which is the same as it was on Feb. 15.

Of the nine deaths reported Thursday, four happened in Vancouver Coastal Health, two each were in the Northern and Interior health authorities, and one was in Fraser Health.

The ministry does not report the vaccination status of people whose deaths are COVID-19-related on a daily basis. However, the B.C. Centre for Disease Control's COVID-19 Surveillance Dashboard reports that data for the last month.

Unvaccinated people account for just 15 per cent of the B.C. population, meaning they are overrepresented among deaths in the province.

According to the BCCDC data, a person who is unvaccinated continues to be more likely to be hospitalized, more likely to end up in intensive care and more likely to die than a person of the same age who has received two or more doses of vaccine.

Among those ages 12 and older, 55.1 per cent have received a booster dose.