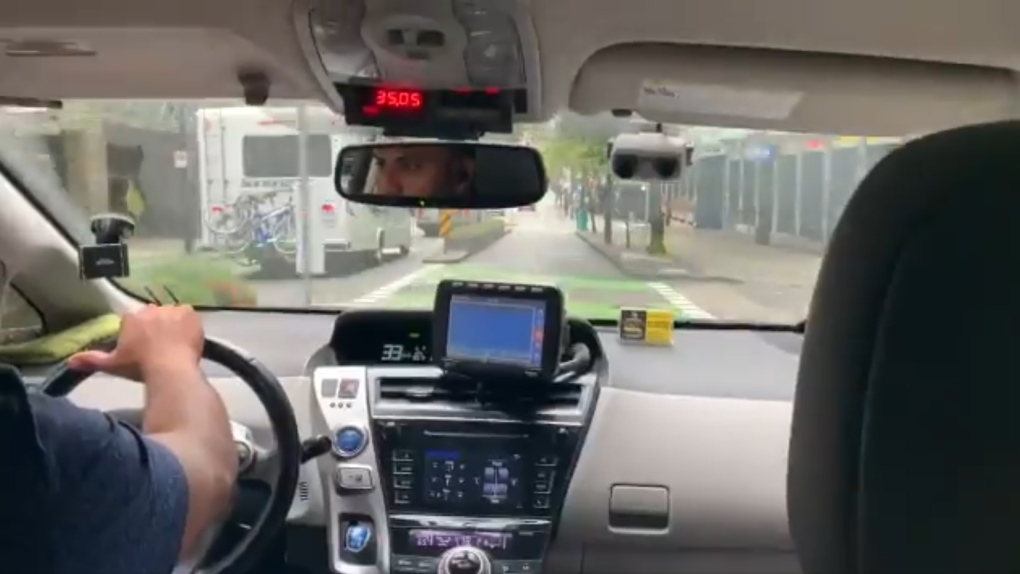 A cab occupies the Dunsmuir bike lane in downtown Vancouver in a video that was posted to Twitter on Sept. 9, 2019. (Nolan Lienhart)

Police are investigating a hair-raising video that shows a taxi driving down a separated bike lane in downtown Vancouver.

The video was captured from the backseat of the cab, and shows the vehicle occupying the Dunsmuir bike lane for at least one city block before merging back into regular traffic.

It was posted online Monday morning by a man who identifies himself as an urban planner from Portland, Ore.

"Got an unexpected tour of the Dunsmuir (bike lane) from my taxi driver," he wrote.

Though it's not visible on the video, the poster said at one point a cyclist also left the bike lane to avoid the taxi.

"I got out of the car wishing Vancouver had #uber and #lyft, both of which would allow me to easily make a complaint in the app, and repeated violations could result in a driver being removed from the service," he wrote.

It's not clear from the video which cab company the driver works for.

Vancouver police confirmed officers from its traffic unit are investigating the video, but said it's too early to provide any further details.

Got an unexpected tour of the Dunsmuir #Cycletrack from my taxi driver on the way to #Railvolution #Vancouver pic.twitter.com/CfM9HqcCGl