Calls for more checks on city toilets after 2 deaths 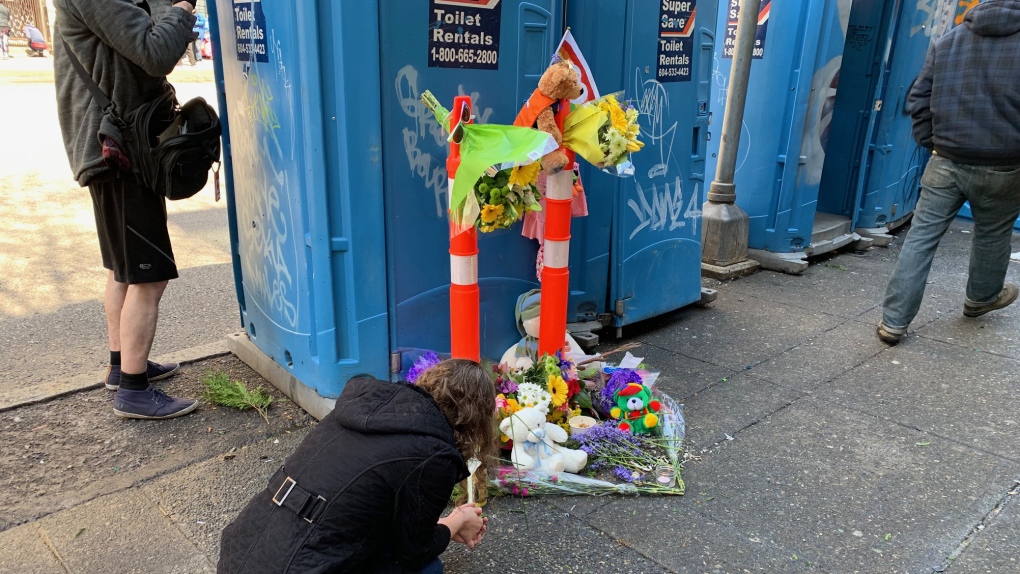 A person visiting a memorial outside the Carnegie Centre in Vancouver's Downtown Eastside is seen on April 23, 2020.

VANCOUVER -- There should be more checks on portable toilets in the Downtown Eastside, which had been set up as an opportunity for homeless people to get clean — but have been the site of two deaths in the past week, advocates say.

A newborn child was found dead inside a portable toilet next to the Carnegie Centre on Wednesday night. Witnesses said a woman was inside for several hours before the body was discovered.

And another person died after an overdose in a portable toilet near Oppenheimer Park over the weekend, police said.

"Had they been in a bathroom at Carnegie instead of a porta-potty would someone have seen to them?" asked Janice Abbott of Atira Women’s Resource Centre.

The City of Vancouver set up 32 portable toilets and 11 handwashing stations across the Downtown Eastside to meet provincial guidelines during the COVID-19 pandemic.

The city said its staff checks and cleans each toilet twice a day. But Abbott said the toilets need to be checked more than that.

“Unless someone is checking them and doing rounds we’ll see more tragedies in the porta-potties for sure,” she said.

A memorial is growing outside the portable toilet next to the Carnegie Centre, as people lay flowers, teddy bears and cards addressed to the child and her mother.

"There’s part of it I don’t understand. It breaks my heart," said one woman.

Police won’t say where the infant was a boy or a girl. It’s unclear whether it was alive or stillborn.

"It was very obvious to the officers this baby was deceased. This is an extremely tragic and troubling incident. We are very concerned for the well-being of the mother," said Const. Tania Visintin.

Amid the COVID-19 pandemic, many services had been shut down and it may have been hard for the woman to access a safe space, said Angela Marie MacDougall of Battered Women Support Services.

"We already had a pandemic of violence against women. We have a pandemic over a pandemic and an opioid crisis. These are dire times," she said.

Tina Beaulieu, who works at the Portland Hotel Society site near the Carnegie Centre, told reporters that she didn’t see any checks on the bank of portable toilets on Wednesday.

"It’s not happening. It shouldn’t be like this," she said.

"It’s cheque week, COVID is happening and there’s no resources for people. It’s hard for everyone in this neighbourhood," she said.