The annual BMO Vancouver Marathon broke records before it even began on Sunday.

With 17,000 runners signed up, this year's event was the highest attended since it first started 46 years ago.

In a statement Sunday morning, the province said runners came from across B.C. and around the world, providing a "significant boost" for the city's tourism industry.

"The economic benefits for the Lower Mainland and B.C. are significant," said Ravi Kahlon, parliamentary secretary for sport and multiculturalism.

"This is just one way our government is attracting people to British Columbia, creating good jobs and a sustainable economy, so that people can experience the best of B.C."

Runners signed up from 65 countries, and the event is webcast to nearly 50 countries, the province said. About 16,000 visitors were expected to stay in hotels in the area.

The event was estimated to generate about $55.75 million.

"It was a really nice 30 kilometres and a really hard 12 kilometres today, but I'm happy I pulled it off," he said in the RUNVAN statement.

Canadians claimed the top five men's spots this weekend, while the top woman was 21-year-old Zhiling Zheng at two hours, 43 minutes, 50 seconds. Through a translator, she called it "the most exciting course I've ever been on," RUNVAN said.

Canadian Olympian Natasha Wodak took home her fourth win in the women's half marathon, while Kenyan runner George Towett had the best time for men.

In another finish-line victory, Chantelle Adamson accepted a proposal from Connor Hasegawa.

"Running is not her favourite sport but she did it for me," Hasegawa told RUNVAN. He carried the ring through the marathon and surprised her at the end.

Several streets were closed ahead of the event, which started at 7 a.m. While some closures were brief, other areas may be closed to vehicle traffic as late as 7 p.m. The route passes through Riley Park, South Cambie, Oakridge, Fairview, Kerrisdale, Dunbar, UBC, Point Grey, Kitsilano, the West End, Coal Harbour, Chinatown, Yaletown, False Creek and downtown.

The below map shows the planned closures in Vancouver's Coal Harbour area. More neighbourhood maps are available on the marathon website. 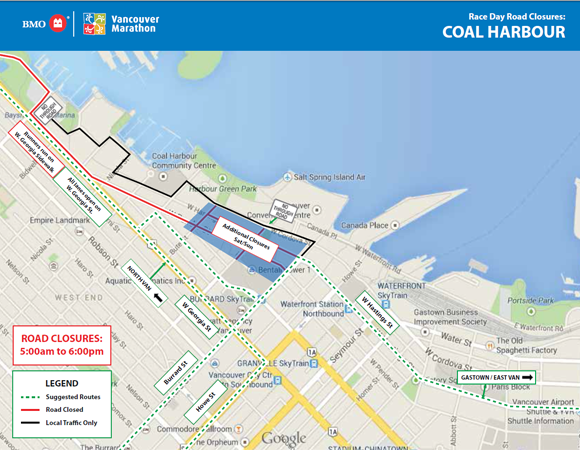