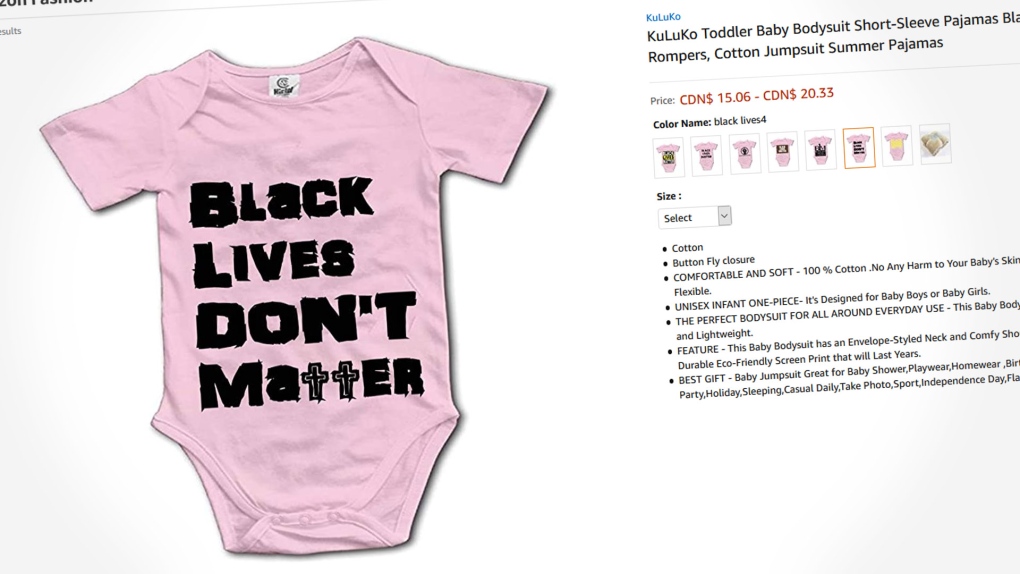 An offensive baby outfit sold on Amazon by seller KuLuKo is seen online on June 16, 2020.

VANCOUVER -- Customers are calling on Amazon Canada to pull an "absolutely disturbing" baby outfit that appeals to opponents of the Black Lives Matter movement from its website.

The pink onesie reads "Black Lives Don't Matter," with crosses used in place of two of the letters, and is sold by a company called KuLuKo.

According to the listing, the baby outfit ships from China and has been for sale since August 2019. The same company also sells Black Lives Matter apparel, presumably targeted toward people who support the cause.

Amazon Canada has not responded to a CTV News request for information on the listing and what screening protocols, if any, the company uses before allowing items to be sold on its website.

A Vancouver woman who came across the listing while shopping online said she was shocked to see something like that being sold through a major retailer.

"I wouldn't put it past people to try and sell this kind of garbage and hate online," said Mireille, who asked that her last name not be used. "I'm just surprised that a big company like Amazon wouldn't have taken these precautions to make sure something like this wouldn't happen."

Mireille told CTV News she tried reaching out to Amazon through several different channels to have the listing taken down before contacting the media.

Amazon has been a vocal supporter of the ongoing movement to address systemic racism, and earlier this month donated $10 million to a number of organizations involved in social justice work, including Black Lives Matter and the NAACP.

CEO Jeff Bezos also publicly responded to an email complaint he received over the company's support for Black Lives Matter by calling the author "the kind of customer I'm happy to lose."

According to the Amazon website, international sellers are bound by a number of obligations, including that they only offer items they are "permitted to sell" and "able to deliver to the customer on time, every time."

Mireille said even some of the apparel she found on the site supporting Black Lives Matter left a bad taste in her mouth, as she fears sellers are trying to personally profit off what she believes is an important movement.

"People are trying to make a buck off what's happening right now – it's not to help the cause," she said. "It doesn't sit well with me."