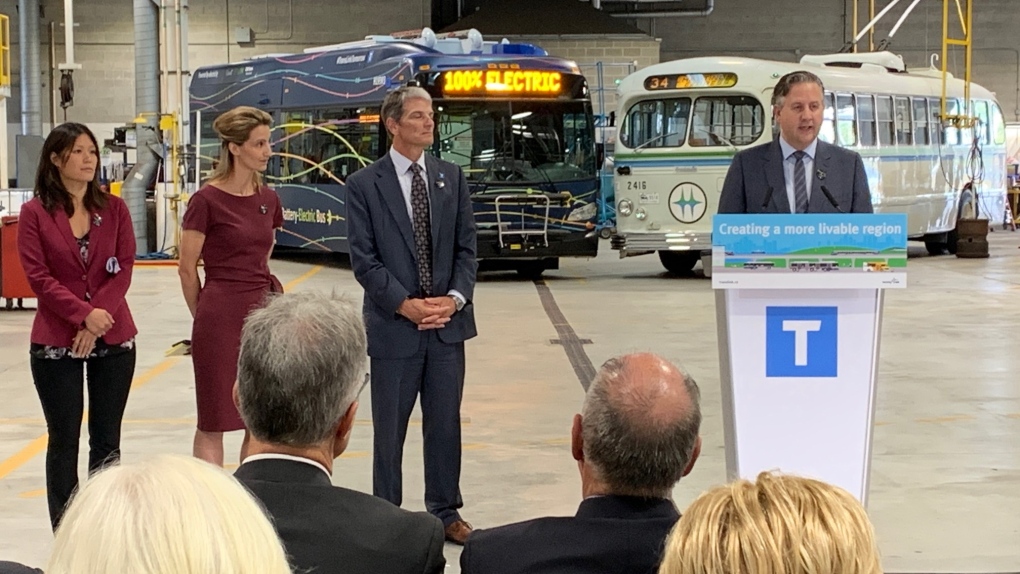 Metro Vancouver has had electric transit buses for more than 70 years, but the region has never had electric buses like these.

The four new buses entered service Wednesday on the 100 route, which runs from Marpole in south Vancouver along Marine Drive into Burnaby, before ending at 22nd Street bus exchange in New Westminster.

"Our hope is that the entire route 100 will, in fairly short order, be 100 per cent electric with further new funding to buy the vehicles," Desmond said.

The pilot project will last for 30 months and will evaluate the performance of the vehicles, the cost and ease of maintenance and the customer experience. It will also test the cross-compatibility of buses and charging equipment, which are provided by four separate manufacturers that have collaborated on the project.

Charging stations at the end points of the 100 route can charge the buses in roughly five minutes, and the buses can travel up to 100 kilometres on a charge, Desmond said.

The buses produce no tailpipe emissions, allowing each one to avoid roughly 100 tonnes of greenhouse gases that would be emitted by a conventional diesel bus.

"Each one of these buses is the equivalent of getting 85 cars off the road," Desmond said.

TransLink also expects to save roughly $40,000 per bus per year by not having to buy diesel fuel for them.

The transit authority's goal is to operate its entire fleet of vessels on 100 per cent renewable energy by 2050 and to reduce its greenhouse gas emissions by 80 per cent by that date.