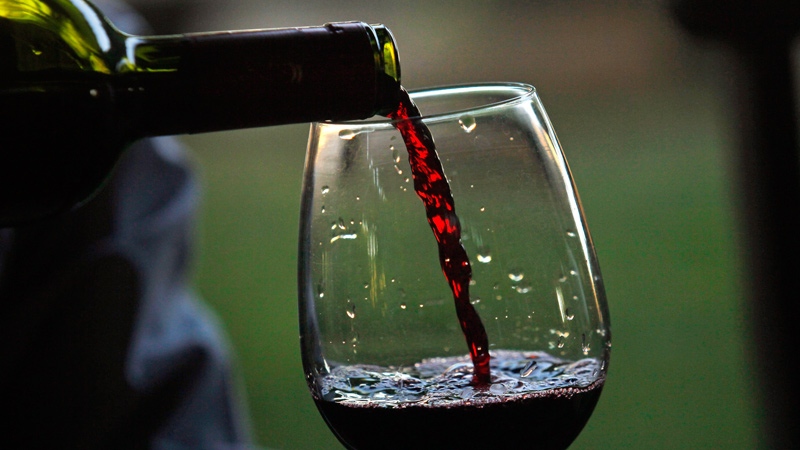 A glass of red wine is seen in this undated file photo. (AP / Luis Hidalgo)

KELOWNA, B.C. -- British Columbia's wine merchants say an Alberta ban on their product is having a crushing impact on the grape business and they plan to go to court to try to stop it.

The B.C. Wine Institute says it has told the Alberta Gaming and Liquor Commission that it will seek a court injunction in Calgary as early as Monday to halt the two-week-old ban pending a legal review of its constitutionality.

"It is severely impacting B.C. winery and grape growers, and many of them are small, family-owned operators," Miles Prodan, president of the institute, said in an interview Wednesday.

"The prospect of losing Alberta, even in the short term, is not good at all, and that's why we reluctantly take this action."

Prodan said a survey of some members showed at least $1 million in lost revenue in the ban's first week and another $4 million in losses are projected by month's end.

Alberta has said B.C. takes in $70 million a year on sales of 17 million bottles of wine to Alberta.

Prodan said he has yet to hear about layoffs, but some wineries are putting expansion plans on hold pending a resolution to the dispute.

The B.C. government is challenging the ban as a violation of Canadian free-trade rules, but that will take months to resolve.

"The ban has had an immediate, material effect," he said. "We just feel that we're backed into a corner somewhat and we need to step up for the best interests of our industry."

The institute speaks for 276 wineries and 923 grape growers who employ more than 12,000 people.

It said Alberta takes in 20 per cent of all bottles produced in B.C., making it the province's biggest customer.

Prodan also noted that an estimated 25 per cent of space on Alberta liquor store shelves is for B.C. wines.

"They've got to sell wine, and if B.C. wine is not available they'll switch, even reluctantly, to something else," said Prodan.

"Once that's lost, it's not an easy return."

It's also feared that the ban will affect wine tourism, he said. The most recent study in 2015 found that one million tourists visited B.C. wineries.

B.C. has not retaliated to Premier Rachel Notley's move so far. B.C. Agriculture Minister Lana Popham said in a statement Wednesday that the province will stand with wine producers against the ban.

"The Alberta government's unfair and illegal decision to ban B.C. wine threatens the livelihood of the families that have worked so hard to build B.C.'s world-class wine industry," she said.

Premier John Horgan has said the province will look to market wine elsewhere, including the United States and Asia.

Prodan called that a welcome, but long-term, prospect. "You don't just shift gears that easily."

Alberta Economic Development Minister Deron Bilous said in an interview that the pipeline bottleneck is costing Alberta -- and Canada -- billions of dollars and lost jobs due to discounted oil prices.

He said Alberta will fight the court application and won't back away from any of its ongoing actions.

Notley imposed the ban in retaliation for a Jan. 30 pledge by Horgan's government to reject increased levels of oil through the Trans Mountain pipeline until the province reviews spill safety measures.

B.C. is against expansion of the Kinder Morgan line from Edmonton to Burnaby, although it has already been approved by the federal government.

Alberta sees Horgan's actions as an illegal way to kill the expansion.

Notley and Prime Minister Justin Trudeau have made it clear that only Ottawa, not the provinces, has the authority to decide what goes in trans-boundary pipelines.

Federal officials have been meeting with their B.C. counterparts to find a solution to the impasse. Notley, who has also scuttled talks to buy B.C. electricity, says she will take further retaliatory action this week if there is no progress in talks.

She has been meeting with a 19-member committee made up of business people and academics to find ways to put more heat on B.C. She has also launched an online protest petition against Horgan, which now has more than 36,000 names.

On Wednesday, the government spent $62,000 to take out full-page ads in B.C. newspapers. They warn that the B.C. government is "trying to break the rules of Confederation and ignore the national climate plan, choosing to agree with only parts of the federal decision."

-- By Dean Bennett in Edmonton