British Columbia continues to see daily cases and hospitalizations climb through the fourth wave of the COVID-19 pandemic, in stark contrast to Ontario, and while experts don’t have all the answers, containment measures in schools may be the biggest factor.

While Alberta and Saskatchewan are much worse by every metric, British Columbia is seeing far more infections and deaths per capita than Canada’s most populous province. With 127 cases per 100,000 residents compared to Ontario’s 34, B.C. has nearly quadruple the proportion of sick people. 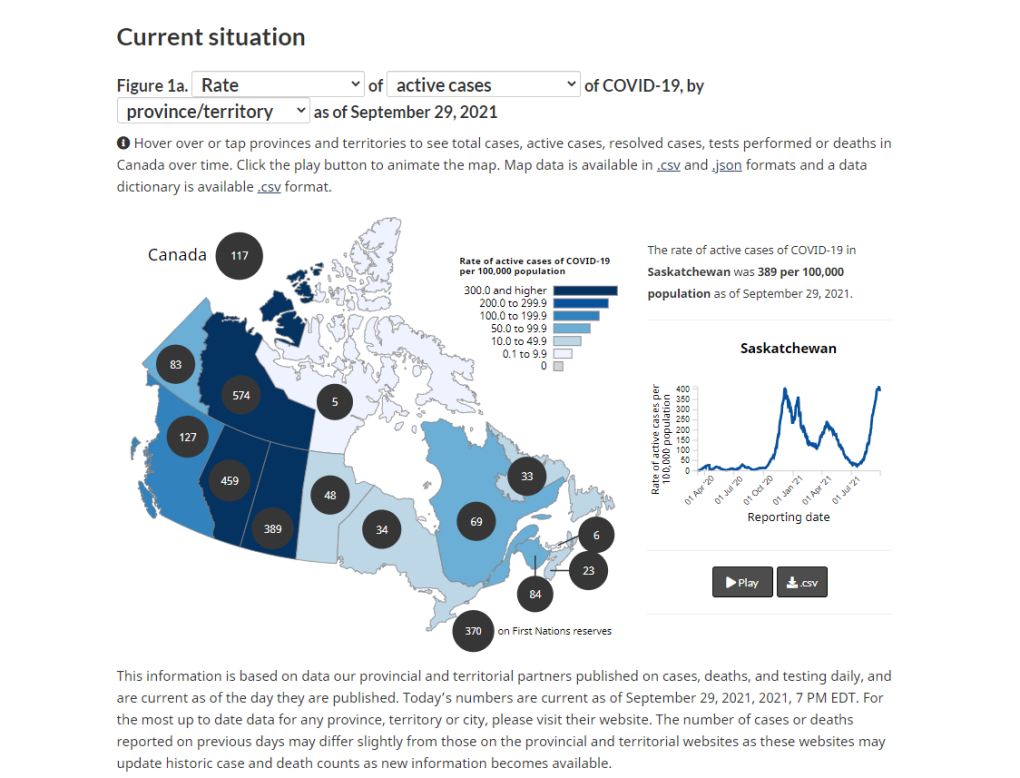 "I don't know why Ontario hasn't taken off like a rocket and some provinces have, but I think it's plausible that is due to what we're doing in schools," said Dr. David Fisman, a physician and epidemiology professor at the University of Toronto’s Dalla Lana School of Public Health.

He pointed out that unlike in British Columbia, Ontario policymakers have recognized that transmission of COVID-19 happens primarily through the air and have responded on several fronts. HEPA air filtration is commonplace, with all Toronto classrooms running a standalone machine. Teachers are intentionally keeping windows open for ventilation and airflow, and children in all grades have been required to wear masks since the previous school year.

"All of the stuff works better if you do it proactively rather than reactively and that seems to be a big problem for B.C., attitudinally,” Fisman explained. “The idea is you do this when it's quiet, proactively, because it's light-touch stuff. This is all about tipping points, so if you have reproduction number great than 1 you get exponential growth in cases and each case makes more than one new case, but if you get it down below 1, nothing happens."

While confirmed COVID-19 cases began skyrocketing in August, once the school year started, the dominant age group becoming infected with COVID-19 was children under the age of 10, who aren’t eligible for vaccination.

B.C.’s provincial health officer acknowledged the Delta variant has had an impact on pediatric infections, but insisted that schools are still the safest place for children to be, and focussed on vaccinations as the best way to curb the spread of the virus.

Dr. Bonnie Henry also defended moving slowly in response to infections, becoming defensive when asked if the K-12 mask mandate – which she imposed Friday after school districts started doing so independently – indicated the public had lost confidence in her back-to-school plan.

“No, I don’t believe that’s it at all,” she said. “We’ve been monitoring the data and I’m not the only person who makes these decisions. It’s something that we have a large group of people who are working on – it’s public health, it’s in partnership with the school districts, parent advisory committees and others.”

Earlier this week, public health officials once again came under fire for a weak testing regime that’s seen long lineups for PCR tests and calls for more rapid tests to detect possible infections. According the Public Health Agency of Canada, there are more than 2 million rapid tests provided by the federal government still unused in provincial warehouses.

The health minister shocked the province when he tweeted about a newborn in an intensive care unit with COVID-19 two weeks ago, but the following morning he insisted the child was home and doing well. At the time, one of Canada’s top doctors warned the risks of the virus are complex for children.

"The impact of COVID on children goes beyond just the hospitalization – of course, severe illness and death is the worst case scenario – but long COVID is one of them and we're just starting to understand what that looks like on children," said Dr. Katharine Smart, president of the Canadian Medical Association, on Sept. 14.

Fisman echoed those concerns and pointed out that although Henry is correct in saying that children are less likely than adults to develop serious illness from the virus, they can still spread the virus to older families members who are at greater risk. He also warned that while one or two per cent of cases in hospital doesn’t sound like much, the more kids that contract the virus, the more seriously sick kids we’ll start to see.