B.C. scientists worry about being portrayed as 'fake news' 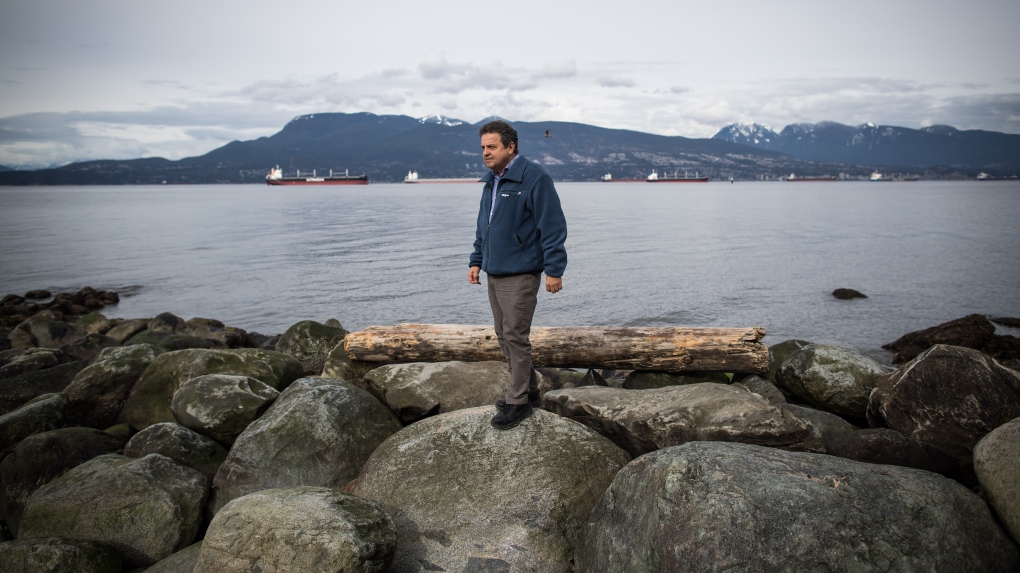 Dr. Andrew Trites, a professor and director of the Marine Mammal Research Unit at the University of British Columbia, walks across rocks at Spanish Banks Beach after posing for a photograph, in Vancouver, on Friday March 15, 2019. (THE CANADIAN PRESS / Darryl Dyck)

VANCOUVER - A marine mammal scientist in Vancouver says he thinks his work has been misrepresented online and he's worried it's part of a trend that has him and his colleagues questioning whether they should talk to media at all in the era of "fake news."

"We've got groups that perhaps don't understand the science but they hear a little piece of science that fits with their own narrative, so they grab onto that," said Andrew Trites, who oversees the marine mammal unit at the University of British Columbia.

"The truth doesn't matter as much as hearing something that works to support your cause."

Trites said a Washington state advocacy group called Save Family Farming recently posted a story alongside a slide from a presentation he gave on the endangered southern resident killer whales.

Trites said the slide shows population changes over a 45-year period, which show four different periods of decline, but could be used to illustrate an overall positive trend.

Save Family Farming's post specifically says the data doesn't mean the whales are safe and adds that Trites and other experts believe the prognosis for the species is not very positive.

But Trites said many people could glance at the page and reach the wrong conclusion. It's a dangerous graph to show in isolation because so many people just read headlines and look at the visuals without reading the story or context.

"The image is very powerful," he said.

Gerald Baron, executive director of Save Family Farming, said the organization fairly and accurately represented Trites' position. The post lists many of the challenges the whales face.

"Obviously you can't put in the headline what the whole story was, but I think we were very careful when we show the chart that this is one of a series of increases and declines," he said. "I think the entire message of it was, these whales are in trouble but they're in trouble due to a number of factors."

Trites said he became aware of the piece about a month ago, but did not reach out to the publication.

David Shiffman, a marine biologist with Simon Fraser University, said he has heard many colleagues gripe about the media's representation of science and believes basic media training for scientists could help solve the problem.

"When they explain the situation to me and exactly what happened, it could have been avoided if they had a little more familiarity with common media practices and the differences in culture between journalists and scientists," he said.

Shiffman has a study underway analysing media and discourse and says the problem isn't getting better.

With the decline of the science beat, Shiffman said scientists can't assume they are speaking with someone with a science background.

"What we can do is get scientists more familiar with how to effectively communicate their results to journalists and we can encourage media outlets to continue to hire and retain specialty journalists who know their stuff," he said.

Thomas Sisk, a professor of environmental science and policy at Northern Arizona University, has also studied the issue.

Beyond media coverage, he said science is not getting the attention it should in political decisions.

As an example, he said he was surprised to see Prime Minister Justin Trudeau say the government's decision to back the Trans Mountain pipeline expansion project was based on "rigorous debate on science and evidence."

Sisk said he submitted a peer-reviewed paper to Trudeau's office on the potential impacts of oilsands on the marine environment and never heard back. A journalist later shared documents obtained through a freedom of information request showing discussion of his work between officials with Natural Resources Canada.

"That seemed to me to clearly indicate that our work had been received, considered, distributed within government and their replies were basically as to how they were going to counter it rather than how to take it into account," he said.

"Our government has been clear that our decisions on projects would be based on science, evidence, and traditional knowledge of Indigenous peoples, and that the views of the public and affected communities will be sought and considered," Adams said in a statement.

Sisk said he doesn't expect decisions to be made solely on science because values have to come into play too. But he does hope that peer-reviewed science directly related to an issue of public importance will at least get a fair hearing.

"With the oilsands, the politicization of that has overwhelmed the science, which is unfortunate," he said. "People want to claim the mantle of science to justify a policy decision, and that seems to undermine the role of science in decision-making and policy making."